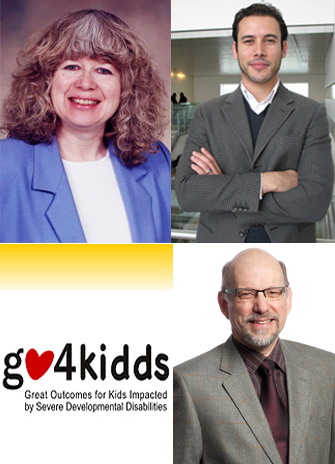 The results of a York-led research project looking at children with developmental disabilities has found more than half of the children also had motor impairments, one-third had no friends at school, half had no friends outside of school and 44 per cent  were reported to have additional challenges, including anxiety and depression.

The Great Outcomes for Kids Impacted by Severe Developmental Disabilities (GO4KIDDS) research project also showed that the stress of raising children with developmental disabilities was taking a toll on the parents with 41 per cent reporting mental health problems and nearly half reporting poor health.

Some of the results of the research were shared March 18at the Department of Psychology in the Faculty of Health hosted celebration and wrap-up of the research phase of the GO4KIDDS research project, funded by the Canadian Institutes of Health Research (CIHR). The project was initiated by a group of researchers and clinicians who saw the need to provide a better understanding about the health, well-being and social inclusion of school-aged children with severe developmental disabilities (DD) and the experiences of their families.

Principal investigator and psychology Professor Adrienne Perry opened the day with the caveat that although the research has been completed, the hard work is far from done. As this project involves different sectors and disciplines, it is important to mobilize the knowledge now and put it to practical use to help those whom they studied.

“The process of putting together the team who’ve been involved was very stimulating and rewarding. The data about health, well-being and social inclusion in regards to children with developmental disabilities and autism forms an important body of work that didn’t exist before today in Canada,” said Perry. “We’re grateful for the funding from CIHR because the findings have important implications. Now our job is to get it out to policy-makers and families in order to make the knowledge useful. The title of the study is Great Outcomes, but some of our findings are not so great – but this is important for people to know, too.”

The project consisted of two objectives: a nationwide “report card” asking parents about their children’s skills and behaviors, physical health, mental health and behavior problems, social participation and well-being, and three focused studies. The co-principal investigators included York psychology Professors James Bebko and Jonathan Weiss, and Queen’s University psychology Professor Patricia Minnes, and team leads Barry Isaacs, director of research and evaluation at Surrey Place Centre, and Professor Rosemary Condillac of Brock University. Together they took on varying roles in carrying out the Family Quality of Life Study, the Social Inclusion Study and the Health Care and Service Utilization Study that comprised the second objective of the GO4KIDDS Project.

Along with the co-investigators, there were co-applicants from other universities and organizations, project coordinators, research coordinators, coders and graduate students hired on to help over the span of the project. This undertaking managed to recruit 800 different families for its database, create 31 posters for local and international conferences, present at six conferences, spur five master’s and bachelor’s thesis projects (so far) and distribute $193,714 to 24 graduate students.

Among the project’s findings:

Among the project’s recommendations:

At the research celebration, Weiss spoke of the “Report Card” and how the team broke it into more manageable pieces, so as to not inundate families with long questionnaires before getting basic information from them. They received responses from over 400parents (mainly from mothers). Seventy per cent of the responses were about boys with DD, where 57 per cent of the whole group with developmental disabilities were also on the Autism Spectrum.

“If we wanted to know about quality of life, we would ask about quality of life,” said Weiss, arguing that their methodology is more direct and easier to code than others in the field. One of the main results from the survey was that a psychiatric diagnosis for those who already had a developmental disability is often linked to negative life events like a transition to a new school an injury or illness in the family, or legal issues.

“This is an ideal example of an emerging research team. Together, a number of researchers from a numbers of institutions managed to study real world issues that had an impact on children with developmental disabilities, including those with autism. The results have implications for policies and practices to support youth with developmental disabilities across the country,” said Weiss.

Bebko’s project, the Social Inclusion study, ran into difficulty finding participants and obtaining approval to study the children (at schools and other community settings). The end results of this study were based on 26 children (median age of 11). He reported that children would rarely, if ever, initiate or be the recipients of interactions with others, even though other children were generally in proximity to them.

“It’s been a gratifying process to be part of. When we started out we realized these kids were often not included in research and we wanted to find out what life was like for them. What our research doesn’t show is that some peers are being really supportive on an intermittent basis. In many cases, though, these kids are like an island. We’re hoping these findings will spur policy makers to improve the situations and raise awareness for it,” said Bebko.

The researchers will be presenting the project at the Ontario Association on Developmental Disabilities annual conference at the beginning of April, after which they will work out a plan to start presenting their findings to different ministries and community organizations.

More information about the project can be found on GO4KIDDS.ca.

By Arina Kharlamova in the Office of the Dean, Faculty of Health