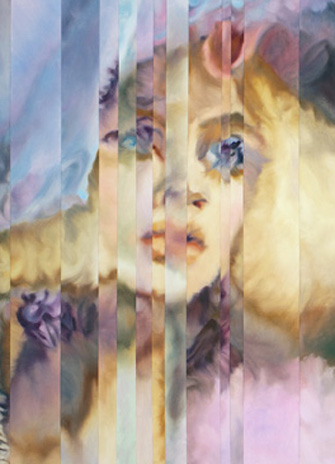 The 2014 edition of Art @ Suite 500 kicks off Thursday at 5pm with a reception at the Schulich School of Business Miles S. Nadal Mangement Centre to launch the new exhibition and honour the winner of the 2013 purchase prize, Amanda Clyne (LLB ’96), MFA candidate in York’s Faculty of Fine Arts and a graduate of Osgoode Hall Law School. Clyne left a successful law career to become a professional artist.

Her work, Mirror, Mirror (36″ x 72″ (diptych), oil on canvas, 2009) , is from a body of work featuring painted portraits composed from fragmented fashion photographs that have been altered and re-photographed in various stages of dissolution. It was selected from among works in the 2013 exhibition and will now hang permanently as part of the collection at the Nadal Centre.

Now in its 18th year, Art @ Suite 500 is an annual juried exhibition featuring works by students and recent alumni of York’s Graduate Program in Visual Arts. The show is a collaborative project of the visual arts graduate program and the Schulich School of Business.

Professor James McKellar, academic director of Schulich’s Program in Real Estate and Infrastructure, and a former architect, is a founding member of the Schulich Art Committee and helped launch the exhibition program when the Nadal Centre opened in 1995. Deciding that the downtown campus needed art to adorn its blank walls, McKellar approached the Faculty of Fine Arts to propose an annual juried exhibition of student work, with one piece of art being purchased each year for the Nadal Centre collection.

“The Art @ Suite 500 collection complements the permanent collection of outstanding Canadian and international art within the Schulich School,” said McKellar. “Schulich takes great pride in its art collection both on campus and at the Nadal Centre, and its patronage of students in the Graduate Program in Visual Arts. We’re at the point now where the Nadal collection represents a permanent record of trends in student work in the Program in Visual Arts over the years.”

Between 10,000 and 12,000 mid- to senior-level managers visit the Nadal Centre for executive programs, as well as MBA students taking evening and weekend courses, so the exhibition receives excellent exposure to a broad community. Alan Middleton, executive director of the Schulich Executive Education Centre and a professor of marketing in the Schulich School, is one of the adjudicators for the event. “We try to stimulate logic, emotion and senses in our management education,” he said. “Our Art @ Suite 500 exhibit is a fabulous extension of our work from wonderfully talented people.”

This year’s exhibit was adjudicated by: architect Clelia Iori; Alan Middleton; Judy Schulich, founder of Blueprint: DNA, a member of the Advisory Committee for the Art Gallery of York University and curator of the permanent collection on the Schulich Building; and Prof. Nell Tenhaaf, director of York’s Graduate Program in Visual Arts.

Art was not Amanda Clyne’s first choice for a career. Although she enjoyed looking at, admiring and experiencing it, she decided creating it was better left to artists, who she saw as “magical beings, fearless and gifted, born with gargantuan imaginations akin to the power of superheroes.”

And so, after receiving her undergraduate degree, she applied to York’s Osgoode Hall Law School and set out on what became a successful and lucrative career “doing billion dollar deals” in New York City and India.

Then 9/11 happened in what was already a trying year for her and she decided to step on the brakes and rethink her future. She realized she was looking for a change and decided it was time to at least try joining the ranks of her art. She enrolled in OCAD University for her second undergraduate degree and followed it up with an application to the Master of Fine Arts Program in Visual Arts at York, where she is completing her final year this spring.

“New York has an amazing spirit that inspires you to imagine more that you can do with your life,” she explained of what empowered her career change.

Clyne is represented by PM Gallery, which is holding an exhibit of her York thesis portfolio from April 9 to May 3. The opening night reception will be held April 10, 6 to 9pm, in the gallery located at 1518 Dundas Street West, Toronto.