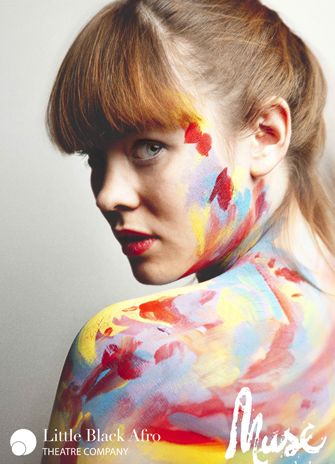 Little Black Afro Theatre’s latest production, Muse, probes human connection and interaction, how people are deeply impacted by each other, and how this translates into their work.

Written and directed by York theatre and English student Veronica Appia, Muse, is an interdisciplinary project that combines visual and performing art to provide audiences with a new and innovative theatrical experience – “gallery theatre”.

The staging is designed to take its audience directly into the action by guiding them to each piece of visual art and monodrama as if it were set up in a gallery. Muse explores the ways in which art is inspired.

Muse has been created and work-shopped, since January 2013, in York University’s Playwriting and New Play Dramaturgy course under the direction of Professor Judith Rudakoff.

For this project, Little Black Afro Theatre is working alongside SKETCH, a community arts development initiative based in Toronto engaging youth artists ages 15 to 29, who are living street involved, homeless or otherwise on the margins. Sketch creates opportunities for them to experience the transformative power of the arts. We are commissioning participants from their programs to create the artwork that is connected to each monodrama, and it will be featured in the play.

There will be a silent auction held during the run of the show to give audience members the chance to own some of the art from the performance. In addition, 10 per cent of the box office will be donated to help support Sketch.

The crew of Muse is also comprised of York theatre students, including: