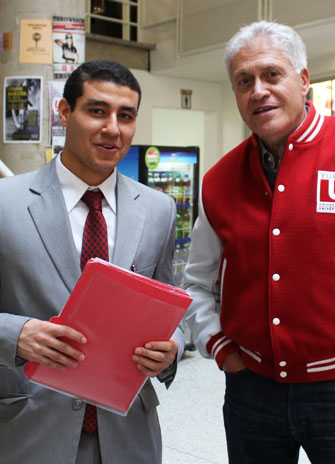 York University student Emanuel Ebrahim had what he described as a life-changing day on March 19.

The third-year Kinesiology and Health Science student switched roles with York University President and Vice-Chancellor Mamdouh Shoukri as part of the University’s third annual President for a Day event.

“I found the experience to be really eye-opening and life changing,” said Ebrahim. “A lot of times, as students, we take what we get without being grateful for what we are receiving. To see the hard work and the dedication of the senior administration, everything that goes into making this University run, it really opened my eyes. I found it life changing because it showed me how important it is to understand how things work.”

As President for a Day, he began his role with a discussion with Harriet Lewis, University secretary and general counsel, about University governance. He then met with York Vice-President Finance and Administration Gary Brewer to review the financials, followed by a meeting with Robert Haché, vice-president research & innovation, to learn more about ongoing research portfolios. After that, it was on to a meeting with Susan Webb, chief communications and marketing officer, to receive an update on the University’s brand and awareness campaign.

With the morning only partially over, Ebrahim chaired a meeting of University officials to address York University spirit, the second priority outlined in his winning essay.

After a brief lunch break, Ebrahim participated in another round table to address his third priority of mentorship programs for students before leaving for another meeting with Wade Hall, associate vice-president of development, about fundraising. Hall prepped Ebrahim for a meeting with York Board of Governors honorary member Guy Burry and also a potential donor, about making a gift to the University.

The afternoon rounded with Ebrahim chairing a roundtable on student priorities with representatives from Student Community & Leadership Development, the York Federation of Students and the other president for a day applicants.

He recounted his experiences in an end of day debrief with President Shoukri and media.

“So, are our finances okay?” asked Shoukri, with a grin.

“The finances look like they are getting better,” replied Ebrahim, “and if the trends continue things will get better. It was interesting to see how much money the University has and where it all goes, and why we can’t just give it all away as bursaries and scholarships the way people want and why we can’t just lower tuition fees because of the financial challenges,” he said.

“And what did Robert Haché tell you about research?” quizzed Shoukri.

“He outlined the advancements the University has made in research, what has been done and where the University is going with respect to research,” said Ebrahim. “I know that you promised to bring more hard sciences to York but I was impressed by the fact that York University has not forgotten its roots in the social sciences. It was very clear that York is not a one-dimensional University.

“The biggest surprise, though, was in my meeting with Harriet Lewis,” laughed Ebrahim. “That’s when I learned how little power you actually have because you have to work with so many different groups and juggle different interests—the Senate, the Board of Governors, faculty.”

“I just don’t know how you do everything,” said Ebrahim.

“And I don’t know how you manage all your classes, volunteer work and club activities,” chuckled Shoukri, who spent the day attending Ebrahim’s classes and activities. “I’m worn out.

“Today I replaced a student who is not only involved academically but also involved in so many extracurricular activities, including a social club, a community club and as a volunteer in a research lab,” said Shoukri, who managed to survive Ebrahim’s Pilates class. “Emanuel is like most York U students and is a reflection of what York students truly are accomplishing. The breadth of his interests is really wonderful and makes me very hopeful in terms of the future.

“The classes were great! The faculty members were wonderful and the TAs and graduate student researchers really incredible. The first class that I went to, Biomechanics, was taught by a faculty member who just so happens to be a mechanical engineer,” said Shoukri.

In sports psychology, Shoukri said he learned the power of visualization, something he plans to use to improve his golf swing. “I actually discovered that I am doing a bit of what the professor was discussing in her lecture and in fact, I am going to do more of it. She lectured about creating an image of what you are going to do, if you are going to race, run the race in your head and create the image. I am going to use that theory to improve my golf stroke and visualize that hole in one.”

He said the experience of being a student for a day reaffirmed his pride in York University’s faculty and students. “The whole experience makes you feel positive about the world. There is just so much energy in the classrooms and labs. These TAs and graduate students are our future professors, and our students and faculty are so dedicated and have the right attitude and spirit. Every year I feel prouder of our community when I get this chance to see firsthand the quality of our students, faculty and staff.”

“This is something that is worth doing,” he said. “There is both knowledge about the university that you acquire from the day and the enjoyment of meeting people.”

And he said with a wide grin, “The whole day passed quickly and I did not have to worry about any of the things that I usually would worry about!”