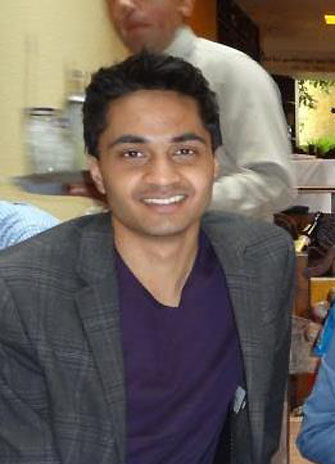 On March 13, Anand Sookrah (BA Hons. ’13) moved one step closer to realizing his dream of becoming a professor of South Asian Studies and a Sanskrit scholar when he boarded a plane bound for New Delhi, India, for a research internship at Delhi University.

A graduate of the humanities and South Asian studies programs in York’s Faculty of Liberal Arts & Professional Studies, Sookrah is the recipient of the Shastri Student Internship Project (SSIP) worth $7,000 CAD. The SSIP provides Sookrah with airfare to India, a monthly stipend, research materials and in-country travel among other expenses for three months. The award, given to high-achieving students, helps recipients to further their research in various disciplines, with a view of preparing for a career in a related field, long-term career goals or an India-related career in academia.

Sookrah will use his award to pursue a research project with an emphasis on the Sanskrit language and political history at India’s prestigious Delhi University.

“My research project is ‘Hindutva (HinduNationalism): Modern Applications of Classical South Asian Social and Political Thought’,” says Sookrah. “While at Delhi University, I am hoping to pursue my studies in the Sanskrit language, read and research the political atmosphere in India with regard to Hindu nationalism, network and develop my research skills as a scholar.”

Understanding Sanskrit, says Sookrah, is vital to appreciating the historical dynamic that informs India’s complex political and social environment. “The longest elections in Indian history are coming and Hindu fundamentalism is playing a major role in the world’s largest democracy,” says Sookrah. “I will be looking at classical Sanskrit manuscripts and primary sources as a way of learning more.”

Attending Delhi University will give Sookrah access to Sanskrit documents that are thousands of years old. Sanskrit is India’s, and humankind’s, oldest language and was used in the Vedas, Hinduism’s sacred writings, and for philosophical, scientific, economic and cultural texts. By reviewing these ancient texts, Sookrah says he will gain a better understanding of Hinduism as a social, political, cultural and civilizational concept, not solely religious. “I hope that my research (in the future) can inform policy makers for the betterment of South Asians, the diaspora as well as humanity, in areas of human rights, social justice and environmental and economic policy,” says Sookrah.

“During my research at Delhi University, I will be interning with the Political Science and Sanskrit Departments,” says Sookrah. “The grant that I received is funded by the Shastri Indo-Canadian Institute and the Department of Foreign Affairs, Trade Development (DFATD), Government of Canada and has also received official approval from the Government of India at the High Commission of India in Ottawa.”

Sookrah will also travel to the Sivananda Kutir ashram, which is located on the headwaters of the Ganges River, in the village of Netala, deep in the Himalayas. There, he will study yoga teachings for four weeks and receive his yoga teacher’s certification in the Indian traditional educational system, gurukula.

Sookrah’s interest in South Asian Studies began during grade school when he learned from a classmate the meaning and pronunciation of his first name Anand and its historical significance. “At that moment that I realized that I was Guyanese/Canadian and Indian and an endless curiosity began,” he says. His aunt researched the family tree and provided it to Sookrah who confirmed that his ancestors came from Calcutta in 1873, documented on emigration papers kept at the national archives in Georgetown, Guyana.

As a youth ambassador at Global Vision, Sookrah travelled to Panama and Costa Rica in 2009 on an economic trade mission and to Mexico in 2012 for the Youth Summit of the official G20 proceedings. He was very involved in extracurricular activities during his undergraduate studies as a member of the South Asia Research Group (SARG) and the United South Asians York group (USAY). He also served as chair of the Student Council of the Faculty of Liberal Arts & Professional Studies (SCOLAPS). In 2013, Sookrah was awarded the Nirvan Bhavan Foundation Award ($1,500) from York University for excellence in his undergraduate studies related to India.

When Sookrah returns from his travels, he will continue his education as a graduate student at the Munk School of Global Affairs in the Masters of Global Affairs program at the University of Toronto in September 2014.