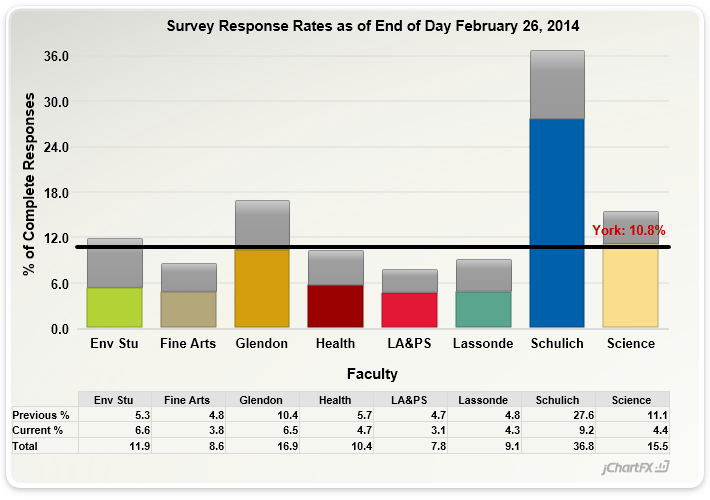 Results for the week of Feb. 26 show that Glendon is now in second place. Schulich continues to lead the challenge.

Starting Feb. 11 and continuing to March 31, thousands of first- and fourth-year York University students are taking part in the National Survey of Student Engagement (NSSE), or “Nessie”. Through NSSE, they’ll be able to contribute their insight and have input into York University’s future direction.

The online survey, which takes between 20 and 30 minutes to complete, allows eligible students in their first and final years of a four-year degree to offer their insight into what York U does well and what it could improve. It will be used to determine how much time and effort students put into educationally rewarding activities and to what degree York University facilitates this involvement. On Tuesday, March 11, Vice-Provost Students, Janet Morrison, sent a reminder e-mail to eligible students who have not yet completed the survey.

To encourage a little friendly competition, organizers inaugurated the NSSE Champion Cup. Similar to the York Torch, Faculties compete against each other. At the end of the survey, the President will award the “NSSE Champion Cup” to the Faculty with the highest participation rate. The winning Faculty gets to keep the Cup – and the bragging rights – until the next NSSE in three years’ time. Faculty results published for the week of March 12 show that the Schulich School of Business is still in the lead but that Glendon and Environmental Studies are slowly gaining on them. Students have until March 31 to complete the survey.

Each student who completes the survey will receive a virtual coupon on their YU-Card that they can use for a free latte at Starbucks (Keele campus) or Tim Hortons (Glendon campus), or they can go to either bookstore to redeem for a $5 York Lanes gift card. Students completing the survey will also automatically be entered in a draw for prizes. There are five $500 tuition waivers, ten $25 YU-Card top ups and ten $25 Keele/Glendon Bookstore coupons.

For more information about the survey, see story in the Feb. 10 issue of YFile or the York NSSE website.