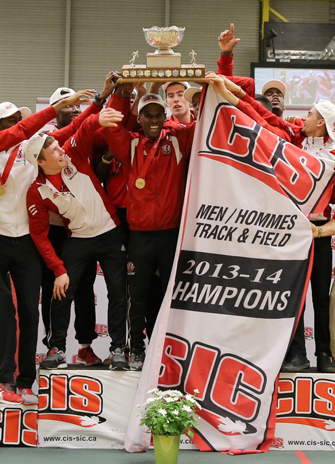 The York University Lions men’s track and field team won the Canadian Interuniversity Sport (CIS) national championship on Saturday, March 8 at the University of Alberta in Edmonton, the squad’s first team banner since 1984.

The Lions finished the three-day meet with 103 total points to claim their third team title in program history, following back-to-back wins in 1983 and 1984.

The end was a thriller, as the Lions entered the final event, the 4 by 400m relay, two points back of the defending champion University of Guelph Gryphons but put up a huge time in the first section of the relay and then watched as Guelph struggled to a seventh-place finish. The 10 points put them over the edge and gave them the banner, six points ahead of the Gryphons.

Overall, the Lions won nine medals in the men’s competition.

Fifth-year sprinter Dontae Richards-Kwok was the star of the championship, winning four individual gold medals to earn the George Gemer Award as the outstanding male athlete of the meet. He ran the opening leg of the 4 by 200 metre relay and the final leg of the 4 by 400 metre relay, winning gold in both, to go along with his first-place finishes in the 60-metre and 300-metre earlier in the weekend.

“I’m happy I was able to finish my career at York with a team title,” said Richards-Kwok, who was the male most outstanding performer in 2012 as well. “I was able to take the team on my back a little bit in my final year and help lift us to the team championship. In years past, we’ve watched other teams get up there and hold that banner and trophy, and we wanted this year. It came down to that last race, the 4 by 400, and I knew if I got the baton at the right time, I could do what I needed to do to help us get that title.”

Richards-Kwok wasn’t the only member of the men’s team to be honoured after the meet, as head coach Colin Inglis earned the Bob Boucher Award as CIS men’s coach of the year after leading the team to the title.

The Lions had a huge final day as they ruled inside the Universiade Pavilion on Day 3. In addition to the relay golds, David McKay won his second straight national title in the pole vault with a season-best jump of 4.95 metres and Eric Brathwaite  reached the top of the podium in the shot put with a throw of 17.81 metres, setting a new school record. Teammate Umar Khan also finished in the top three in the shot put, winning his second consecutive bronze in the event.

Brathwaite returns home with a pair of individual medals as he also won the silver in the weight throw on Friday evening.

Rounding out the medals was Bismark Boateng, who captured bronze in the 300-metre on Day 2. He finished the meet with a trio of individual medals as he ran on the 4 by 200 metre and 4 by 400 metre relays.

Also winning relay gold medals were Ayo Agusto and Jameel Brown in the 4 by 200 metre and Birko Montinat and Ryan Charlton in the 4 by 400 metre.

The Lions made it a clean sweep of the most outstanding athlete awards as Khamica Bingham earned the women’s award with three gold medals at the championship. On Saturday she ran the opening leg of the 4 by 200 metre relay team that finished in first place, adding the medal to the golds she won the 60-metre and 300-metre. She also broke a CIS championship record in the 60-metre with a time of 7.26 seconds.

Joining Bingham at the top of the podium were Sheereen Harris, Danielle Knight and Tameran Defreitas.

The final York medal of the weekend came courtesy of Brittany Crew, who won the silver medal in the shot put on Friday.