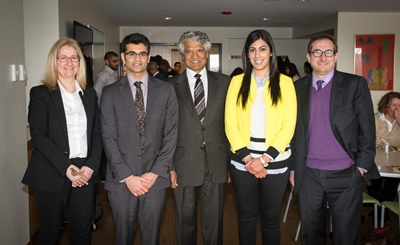 Third-year JD student Avnish Nanda was bursting with pride when he stepped up to the microphone in Osgoode’s Gowlings Hall on Feb. 26.

Looking out at the large crowd of people who had gathered for a lively lunch-hour celebration organized by the Osgoode South Asian Law Students’ Association (SALSA) as part of Diversity Week, Nanda made a big announcement. “After six months of fundraising, we managed to raise in excess of $50,000, thanks in large part to the generous contribution of Blakes,” he said. “We are proud to announce the launch of two funds – the Honourable Russell Juriansz ’72 Bursary Fund and the Blakes/Juriansz Inclusivity Fund – to help promote inclusivity, equity and accessibility at Osgoode.”

Nanda wanted to create a student award that would recognize Juriansz, and he and fellow SALSA members worked hard to make it happen. After months of events and fundraising appeals, they raised almost $20,000.

When Blakes heard about SALSA’s plan to honour their former colleague, the firm made its own contribution of $25,000 to endow the Blakes/Juriansz Inclusivity Fund.  Osgoode will provide matching funds for both of these awards.

“Throughout his career, Russell Juriansz has been an advocate of human rights, inclusion and equity. I can think of no better way to recognize these efforts than endowing these two very meaningful funds that will serve generations of future law students,” said Osgoode Dean Lorne Sossin.

Juriansz told the audience – including Mary Jackson of Blakes, who represented the firm at the event – that he was “deeply honoured” by the establishment of the awards and very proud to have had a 45-year association with Osgoode.

Sossin also expressed the law school’s pride in Osgoode’s students and alumni and thanked Blakes and SALSA for making the awards possible.

“We hope to grow both of those funds over time,” said Sossin, who referred to the awards as “touchstones” that will “break down barriers and let every student fulfill their dreams and aspirations at Osgoode.”

Later in an interview, Nanda said the Blakes/Juriansz Inclusivity Fund “will go a long ways towards empowering students at Osgoode to be confident in who they are and to expect that law school and the legal profession will be accepting of their unique identities. Blakes, through their very generous donation towards establishing this fund, demonstrates that they are also committed to a diverse and inclusive legal profession and community where we all belong.”