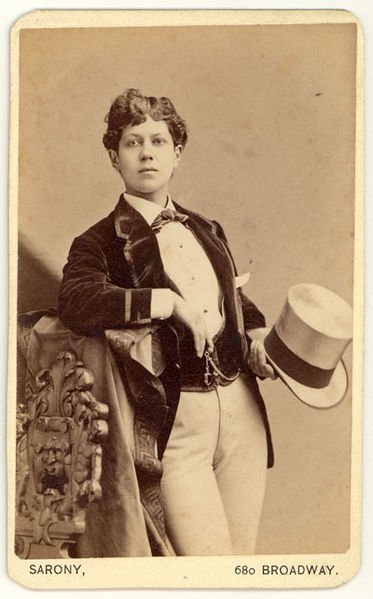 Carte-de-Visite by the studio of the noted American popular portraitist Napoleon Sarony at 680 Broadway in New York, depicting the male impersonator Ella Wesner in one of her identities as a “sporting” young man. Made c. 1872-75. Photo: Library of Congress Prints and Photographs Division.

Terrell Carver, professor of political theory at the University of Bristol, is the guest presenter for the 2014 York Sociology Annual Lecture, on March 11 at 4pm in the Senate Chamber, N940 Ross Building.

Carver’s lecture is titled, “Why can’t a woman be more like a man? Feminisms and masculinities in theory and practice”.

Carver is a specialist in Marx, Engles and Marxism, taking hermeneutic, feminist and postmodernist approaches to his explorations of the classic cannon. Carver’s recent research is in the political theory of sex, gender and masculinities, with a specific focus on international relations. Carver is the author of Gender is Not a Synonym for Women (1996), Men in Political Theory (pb edn 2009), and “Sex, Gender and Heteronormativity: Seeing ‘Some Like It Hot as a Heterosexual Dystopia’”, Contemporary Political Theory (2009).

Performative approaches to gender and politics focus not on what things “are” but on how humans make them “do”. Feminist politics, among other things, has highlighted the perspective from which “doings” are conceptualized. Foucauldian analysis has shown how concepts are “done” to create power relationships that create and constrain mutual perceptions (as human “identities”) and social practices (as disciplinary “doings”). Discursive approaches to popular culture show how these meanings are generated and circulated in “excess” that can be interpreted in multiple ways.

Gayle Rubin’s insights, somewhat paraphrased from The Traffic in Women (1975) inform Carver’s presentation; firstly, how do you take a human being and make a woman of it? Secondly, gender does not express difference – it suppresses similarity.

If what someone does, e.g. in employment, is indifferent with respect to being a man and acting in a masculine way, is there a problem if someone – say, otherwise identified as a woman – is “like that”? Or is “someone” always and already a “woman,” and not “like that”? Is feminist politics always and already founded on the woman/man binary, but yet dedicated to equalization of the hierarchy?

In considering this dilemma, do anti-discrimination policies and outcomes with respect to race/ethnicity and sexualities provide productive analogies of transformative (non)recognition? Is someone always and already Black or Indigenous, straight or gay, even though in some contexts these identities are consciously invoked – but then contextually disavowed as irrelevant to the matters at hand? This happens, for example, in employment processes of selection, evaluation, treatment, etc. which are subject to regulations that prohibit unwarranted discrimination on various grounds.

In his lecture, Carver will argue that gender/sex as a natural and naturalized binary is being eroded in practice, not just by the ambiguous and sometimes controversial process of invocation and contextual disavowal, but by further developments that apparently presage the erasure of gender, and therefore of woman.

“I examine the prospects for ‘genderless’ identity documents and also the ‘1 and 2’ identities produced in contexts of same-sex marriage and adoption,” writes Carver in his lecture abstract. “I then reflect on the implications for heteronormative state regulation of inheritance and intestacy through traditional ‘blood’ lines of legally obligatory kinship identities.”

He will consider this question: “Do these developments represent a process of nondiscrimination (analogous to race and sexuality) that works against the gendered oppression of women, or do they represent practices of erasure and ‘ungendering’ that ‘undoes’ a feminist politics of gender equality?

The Annual Sociology Lecture is free and open to the public.