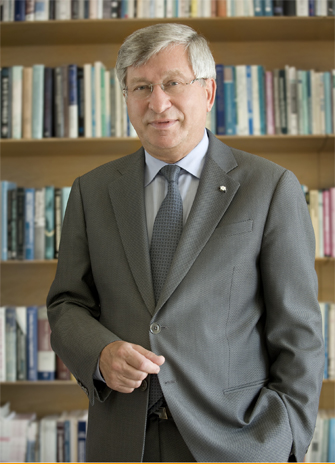 Dezsö J. Horváth, dean of the Schulich School of Business at York University, was selected by the Toronto Star as one of the 180 people, past and present, who helped shape the City of Toronto since its founding in 1834.

The Toronto Star published a special section March 1 in commemoration of Toronto’s 180 birthday March 6 that profiled 180 of the city’s most significant contributors. Several other York University faculty and alumni also made the list.

Horváth was included in the “Trailblazers and Innovators” section alongside Alexander Graham Bell, inventor of the telephone; Dr. Federick Banting, who discovered insulin; and Egerton Ryerson, considered the “father of public education” in Ontario. Horváth was recognized for his 26-year tenure as dean of Schulich, one of Canada’s leading business schools, known worldwide for its focus on responsible business.

Philosophy Professor Emeritus Howard Adelman, who founded York’s Centre for Refugee Studies, and award-winning author and English Professor Michael Ondaatje, a poet and filmmaker who began teaching at Glendon College in 1971, were listed in the “Rascals and Eccentrics” and the “Artists and Entertainers” categories respectively.

York alumni who made the top 180 contributors list include: Jack Layton (MA ’72, PhD ’83), former leader of the NDP, who was in the “City Fathers” category alongside David Miller, Paul Godfrey, David Crombie, Nathan Phillips and others; and Janice Fukakusa (MBA ’79), the chief administrative officer and chief officer of the Royal Bank of Canada and member of the Dean’s Advisory Council at Schulich, who was featured in “The Business World” category. Avvy Go (LLM ’99), clinic director of Metro Toronto Chinese and Southeast Asian Legal Clinic, and Craig Kielburger (EMBA ’08), co-founder of Free the Children, the world’s leading youth-driven charity, were both included in the “Rebels for the Cause” category. CEO and founder of Yuk Yuk’s International Mark Breslin (BA’73), founding member of the Canadian Comedy Awards, was in the “Artists and Entertainers” category.

Leslie Dan, founder of the pharmaceutical company Novopharm and a member of the Dean’s Advisory Council at Schulich, was listed in “The Business World” category.

George Vari was also in “The Business World” category and although he is not a York University alumnus or faculty, he does have a York building named after him – Vari Hall.

Other prominent Torontonians were recognized in several other categories, including “Architects and Builders” and “Community Builders”.