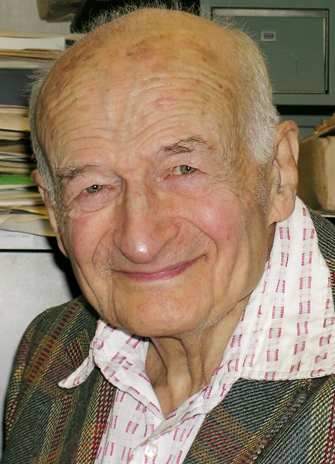 On Friday, Feb. 28, York Professor Emeritus of mathematics and civil rights activist Lee Lorch died in a Toronto hospital. He was 98 years old.

A memorial service for Professor Lorch will be held in the fall. Details, once available, will be published in YFile.

“York University was fortunate to have Lee Lorch as part of our community for so many years. He was an extraordinary human being – not only a gifted researcher and teacher, but a true leader at the institution and in his community,” said York President & Vice-Chancellor Mamdouh Shoukri. “Intensely principled, Lee was a champion of social justice as well as a passionate advocate of political and academic freedoms. He will be greatly missed by the York University community and by all who knew him.”

Born in New York City in 1915, Professor Lorch came of age during the 1930s and 1940s, when it was impossible to ignore the hatred brewing in Europe. He earned degrees from Cornell University and the University of Cincinnati, then quit a draft-exempt job as a mathematician with an agency that was the precursor of the National Aeronautics and Space Administration (NASA) to serve in the US Army during the Second World War. He didn’t want to have “a safe berth” while his contemporaries were risking their lives fighting the Nazis. From then on, he faced injustice wherever he encountered it – and risked the consequences.

After the war, he held, then lost, faculty positions at a string of different American universities over his often very public stands on civil rights.

He was fired from City College of New York for his attempts to end racial segregation in the housing development where he lived. The development had been built in Stuyvesant Town, a slum neighbourhood cleared to make way for the new housing for war vets, and didn’t admit non-whites. “This became a big issue in the city,” remembered Prof. Lorch in an article published in YFile in 2007. “The world had just witnessed racism that sent millions into gas chambers. There was a lot of popular support to end racist practices, but there was no support in the courts. That was before there was any civil rights legislation.” Then Pennsylvania State University, pressed by influential business interests, fired Lorch for allowing a black family to live in his Stuyvesant Town apartment.

The attempts to discredit him continued as Lorch tried to persuade the Mathematical Association of America (MAA) to overrule the organizers and admit his black colleagues in the mathematics department to a banquet at the regional meeting in Nashville, and after enrolling his daughter in a black neighbourhood school bordering Fisk University, where he had found his next job. Although the US Supreme Court had ruled against school segregation on May 17, 1954, Lorch was summoned before the House Committee on Un-American Activities. He refused to testify on his political affiliations, and was indicted, tried and acquitted for contempt of Congress. Fisk University’s predominantly white board of trustees dismissed him over the objections of his mathematics colleagues and the leading black trustees. But – small victory – two years later, the MAA made it policy never to hold banquets in establishments that discriminated against blacks.

“If you stand aside and benefit from something while other people suffer, it is difficult to look yourself in the face,” said Lorch. “Sometimes you have to do what is right, otherwise you consent to doing what’s wrong. If you accept something because you’re white knowing somebody black will be denied the same thing, what’s your moral position?”

In 1955, Lorch moved on to Philander Smith College in Little Rock, Ark., as Chair of its mathematics department. Two years later, the Arkansas National Guard, acting on direct orders from the governor, surrounded Little Rock High School in an attempt to keep the nine enrolled black students off the premises; this, in the face of the US Supreme Court ruling for school desegregation. One of the black students, a 15-year-old girl, was menaced by a mob during the stand-off. Lorch’s wife Grace saved her from the mob, and subsequently took her home. Threats against the school and against Lorch’s family became so intolerable he resigned.

By 1959, Lorch was blacklisted at US schools. He accepted an offer from the University of Alberta in Edmonton and moved his family to Canada. He stayed in Edmonton for nine years until York University lured him to Toronto in 1968.

Since then, history has reversed its verdict. Two of the colleges that fired him – City University of New York and Fisk University – have given him honorary degrees. In 1976, he received a special award from Howard University for his contributions to civil rights and the education of black mathematicians. He accepted a similar award from the US National Academy of Sciences in 1990. Spelman College in Atlanta, the leading college in the US for black women, gave him an honorary doctorate for his lifelong struggle to obtain equal opportunities for black Americans. In 1993, York University also gave him an honorary degree for both mathematics and civil rights activism. And in 2003, the International Society for Analysis, Applications and Computation presented him with an honorary life membership for distinguished mathematical contributions and for his struggles for the disadvantaged and world peace.

He was also a Fellow of the Royal Society of Canada’s Academy of Science (1968) and of the American Association for the Advancement of Science. He served on grant selection committees for the National Research Council of Canada, was elected to the councils of Canadian and American mathematical societies and was invited to lecture all over the world.

In 2007, Lorch joined a list of distinguished mathematicians from Harvard, Berkeley, Chicago, Princeton, Stanford and other American universities who had received the Gung and Hu Award, endowed in 1990 and the successor of the MAA’s Award for Distinguished Service to Mathematics, which made its first appearance in 1962. The very best mathematicians in their fields have won this award, and they include Hyman Bass (Michigan, 2006), Paul R. Halmos (Santa Clara, 2000), Andrew Gleason (Harvard, 1996), Annali Lax (NYU, 1995), Leon Henkin (Berkeley, 1990), Saunders MacLane (Chicago, 1975), R.H. Bing (Texas at Austin, 1974), A.W. Tucker (Princeton, 1968) and George Polya (Stanford, 1963).

On paper, Lorch retired in 1985. But, as he always liked to say, “I’m not retired. Unfortunately my salary is.” At 91, he was still using an office at York University, an activity he continued until just a few short years ago. During his early 90s, Lorch collaborated on a research paper about Bessel functions with Prof. Martin Muldoon, a former grad student under Lorch in Edmonton, who was also retired from York’s Mathematics Department. Lorch travelled to and from the campus frequently well into his 90s. He could be spotted on campus participating in meetings and other activities. He was a regular patron of restaurants in York Lanes and enjoyed Middle Eastern cuisine in particular. During his later years, Lorch loved the freedom that e-mail and the Internet provided and while his physical mobility decreased, his online activity and activism increased. Up until he was hospitalized, Lorch devoured five newspapers a day, including the New York Times. He would send flurries of e-mails daily about peace and justice issues to friends and acquaintances in and out of the mathematical community.

Did he feel he’d made headway in his struggles against racism, inequality and injustice? “Yes,” he said, “but there’s a long way to go. These issues are still very much with us.”

With files from YFile and the York University Gazette archives. Images from the Clara Thomas Archives and Special Collections at York University. The image of Grace Lorch and Elizabeth Eckford is from the National Archives and Records Administration of the United States. The original image was posted at: http://ourpresidents.tumblr.com/post/9876368391/in-the-summer-of-1957-the-city-of-little-rock.