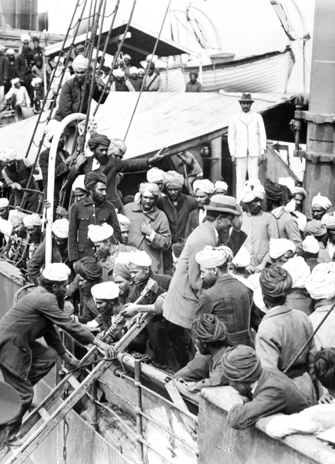 This year marks the 100th anniversary of the Komagata Maru Episode when Canada turned away 376 migrants of South Asian origin aboard a Japanese steamship in Vancouver’s Burrard Inlet. A series of events, including an exhibit, an award-winning documentary and several lectures will commemorate the anniversary, from March 10 to 15.

One of the speakers, former premier of British Columbia Ujjal Dosanjh, will talk about why he opposes government apologies for historical wrongs perpetrated against cultural communities in Canada. His talk, “Why Apologizing for Historical Wrongs is Wrong”, will take place Thursday, March 13, from 6 to 8pm, at the Law Society of Upper Canada’s Osgoode Hall, 130 Queen St. W., Toronto. The talk, sponsored by the Osgoode Alumni Association, is free and everyone is welcome to attend (RSVP).

The passengers were turned away in 1914 amid fears over Asian immigration, which had led the Canadian government to adopt a series of racist exclusionary policies against Chinese, Japanese and Indian migrants. Komagata Maru Week is hosted by the Osgoode South Asian Law Students’ Association. The events during Komagata Maru Week will not only explore what happened in Vancouver’s Burrard Inlet a century ago, but also situate the episode in the broader context of Canadian history and draw links to contemporary migratory discourses, laws and policies.

A portion of the Komagata Maru Collection from the Sikh Heritage Museum of Canada, including rare photographs, key documents and other materials, will be available for viewing. The exhibit will run from March 10 to 15 at the Osgoode Hall Law School Library, Ignat Kaneff Building, Keele campus, during regular library hours. The exhibit is free, but an RSVP is needed to guarantee entry.

The entire collection will be on display Wednesday, March 12, the same day the museum’s executive director, Pardeep Singh Nagra, will discuss, “Sikhs in Canada: The Legacy of the Komagata Maru”, from 12:30 to 2:30pm. He will focus on the 1914 fateful journey of the Komagata Maru steam liner and its attempt to transport 376 passengers, 340 of whom were Sikh immigrants. The ship became the first ship carrying migrants to be turned away by Canada. The lecture is free and everyone is welcome to attend.

Continuous Journey, an award-winning documentary about the episode, will screen Monday, March 10, from 12:30 to 2:30pm, in the Moot Court, Ignat Kaneff Building, Osgoode Hall Law School, Keele campus. A Q&A session with the film’s director, York Professor Ali Kazimi, will follow the screening. RSVP to guarantee entry. The event is free and open to everyone.

University of Toronto Professor Audrey Macklin will deliver will discuss, “Getting to We: The Komagata Maru, the Unmaking of Empire and the Making of a Settler Society”, Tuesday, March 11, from noon to 2pm, in the Moot Court, Ignat Kaneff Building. The lecture is co-sponsored by the South Asian Law Students’ Association, Canadian Association of Refugee Lawyers Osgoode Student Branch, South Asia Research Group and United South Asians at York. RSVP to guarantee entry.

Macklin will explore the 1914 Komagata Maru episode as a transformative moment in the evolution of Canadian citizenship. Her lecture will situate the Komagata Maru Episode in the national and imperial context of the early 20th century, as well as identify traces of the episode in present-day Canada.

Canadian citizenship did not formally emerge until 1947 – the same year as India achieved independence. Until then, all inhabitants of the British Empire shared a common status as British subjects. The British proclaimed that all British subjects were equal, and free mobility throughout the Empire was one manifestation of that equality.

The vehemence with which Canadian officials sought to exclude the Indian passengers aboard the Komagata Maru belied their alleged equality as British subjects, yet the means by which the exclusion was accomplished also demonstrated the need to conceal the government’s motive behind an apparently neutral regulation, notes Macklin.

That the Canadian government formally apologized for the Komagata Maru Episode suggests that the impact and meaning of the event is safely sequestered in the past, says Macklin. However, the moral panic surrounding the arrival of people on boats, the transnational security discourse, the racialization of Canadian citizenship, the reliance on low-visibility, highly discretionary tools, and easily manipulated tools for regulating migration, remain significant features of contemporary Canadian migration law, policy and discourse.

While events during Komagata Maru Week are free and open to all, donations will be accepted on behalf of the Canadian Association of Refugee Lawyers.