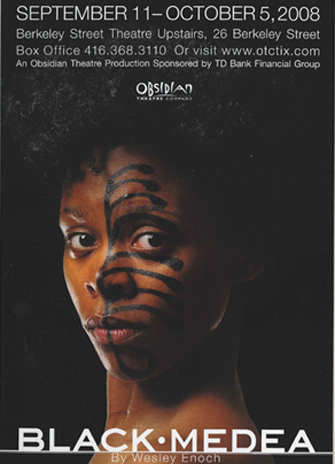 One of the first things Melanie Hague did after Obsidian Theatre Company hired her in 2011 was pack the posters, programs, photos, stage managers’ books and grant records into boxes and donate them to York’s Clara Thomas Archives and Special Collections.

Hague had just graduated with a master’s of fine arts in theatre and the imperative of her playwriting professor, Judith Rudakoff, still rang in her ears: If you work for a theatre company, make sure it archives its materials!

Obsidian was not the first company devoted to bringing black voices to Canada’s stage. But it would be almost impossible to find out anything about its predecessors, Theatre Fountainhead and the Black Theatre Company, because nobody had saved their materials, says Hague. She would not let that happen to Obsidian.

“It is about creating our own history,” says Hague, who is Obsidian’s artist development coordinator. “It needs to be created now, so people know what we did, can find out what we did and be inspired to pursue their own craft.”

“There are some real jewels,” she says, in the Obsidian collection. For instance, Alison Sealy-Smith, one of 13 Obsidian founders and its first artistic director, left handwritten minutes of the first meeting. “She didn’t believe in computers.”

Guelph University has a major Canadian theatre archive, but Obsidian chose to donate its materials to York. The University is closer and more accessible to York and other Toronto-based theatre history students, she says.

The fonds consists of 2.2 metres of materials and 180 photographs spanning from 2000, when it was founded, to 2010. They include posters, programs, costume sketches from every play produced by the company – often in partnership with other companies – from the inaugural play, Adventures of a Black Girl in Search of God in 2002 to Ruined in 2011.

Akin and 12 other black actors founded Obsidian in 1999. “We weren’t seeing ourselves on Canadian stages,” he says. “We were overwhelmed by the oppressive Caucasian look of Canadian theatre.” In movies, young black men typically played pimps, punks and drug addicts, and older men played cops, lawyers and judges – or the incestuous stepfather. “We started Obsidian in the hopes that we would be able to get our stories on deck.”

The founders chose “obsidian” for the company’s name because the first mirrors were made of this shiny black volcanic rock. “Reflections in black” became the company’s tag line.

Of some 25 productions, a highlight was the production of Intimate Apparel, by Pulitzer Prize-winning playwright Lynn Nottage, in the fall of 2008. Directed by Akin, the play was about a 35-year-old seamstress in 1905 and her relationship with four other people. “It showed a slice of black life that you would not normally see up here. Esther was just a working woman. The play was not about drugs, guns or slavery but about human beings,” said Akin. Intimate Apparel opened at Berkeley Theatre, was picked up by Canadian Stage, toured to Halifax, then to Montreal, Calgary, Edmonton and Vancouver. “That wouldn’t have happened without Obsidian,” says Akin, “because nobody else would have picked up that play.”

Today, Akin estimates that 12 to 14 per cent of actors on Toronto stages are non-white. Since Obsidian was founded, several more culturally diverse theatre companies have been formed. Obsidian doesn’t have its own physical stage, but partners with other Toronto theatres to mount productions. “We will keep doing what we are doing – developing new plays, new playwrights and training new actors,” says Akin. Competition is stiffer these days. “What’s most important is to do top quality productions.”