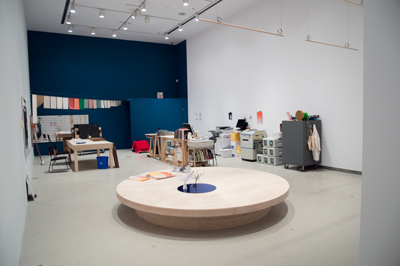 This winter the Art Gallery of York University (AGYU) celebrates its 25th anniversary with The Centre For Incidental Activisms (CIA) #2, the second in a series of experimental exhibition projects that re-envision a different role and function for the gallery space. CIA #2 brings together members of the Toronto art community and members of the Jane-Finch community in an open situation of art-based research driven by unconventional aesthetic and social investigations. Over the course of the two-month exhibition, projects are developed in the gallery through hands-on “studio-based” explorations, workshops, screenings, hosted events, guerrilla publishing, and other convivial encounters with individuals and groups brought into the gallery from York University and beyond.

The exhibition opens Feb. 5 with a public reception from 6 to 9pm and continues through to March 2.

CIA #2 is a choreographed collaboration between social organizer and visual artist Maggie Flynn, dancer and choreographer Ame Henderson, writer and “paper pusher” Jp King, and the interdisciplinary collective Terrarea (Janis Demkiw, Emily Hogg, Olia Mishchenko) with a series of special projects by spoken word artist The M.A.D. Poet (aka Melissa A. Dean) and artist and educator Mark “Kurupt” Stoddart titled, If We Ruled the World, a multidisciplinary art program with Jane-Finch youth from the Success Beyond Limits program that focuses on urban planning and spatial justice through spoken word poetry, film, workshops, music production, exhibition, and an architectural charrette.

Through a series of planned and improvised situations, CIA #2 sets in motion the relationship between people, ideas, and spaces where the brokering of different viewpoints, perspectives, and forms of artistic production is a central part of the work undertaken. Visit the AGYU website for more information on specific CIA #2 events and visit the exhibition often: the gallery will never look the same way twice.

Get on the Performance Bus!

Setting in motion, relations between people, ideas and spaces, Wayne and Derek Liddington, father and son,share a sentimental journey with riders on “The Performance Bus”. Through a combination of experienced and inexperienced memory, Derek, a Toronto-based artist, and Wayne, a Mississauga Transit driver, reenact one of the most important moments of sharing and learning between a father and son: learning how to drive. Only now the stakes are increased (in proportion to the size of the vehicle). Using “The Performance Bus” as a context and as a prop, they explore this historical moment of exchange and coming of age experience as a public conversation that has wider implications concerning pedagogy, participation and performance.

The free Performance Bus departs the OCADU (100 McCaul St. Toronto) on Wednesday, Feb. 5 at 6pm sharp en route to the opening reception of the Centre For Incidental Activisms (CIA) #2 at AGYU and returns downtown at 9pm.

Different modes of address and shared communication seep out of the CIA #2 into AGYU Vitrines (located just outside the gallery entrance) with Jade Rude, who is sending out a secret message in a code that only the viewer can decipher. The hidden note is revealed by linking the AGYU Vitrines to her Project 674 (3rd Floor, 674 Queen Street West).  Crosswords across the city, reading from one window to the other, cryptic text covertly implies that where the viewer is situated is potentially not where it is.

Is it a dog? Is it a plane? No (and yes depending on the viewpoint), it’s Bill Burns’ Dogs and Boats and Airplanes Choir! The Audio Out listening post features a choral work Burns developed in collaboration with eight- to 12-year-old students in Toronto about agency, pedigree, global capital and travel.

The Art Gallery of York University is a university-affiliated public non-profit contemporary art gallery supported by York University, The Canada Council for the Arts, the Ontario Arts Council, the City of Toronto through the Toronto Arts Council and its membership.

The AGYU is located in the Accolade East Building on York’s Keele campus. Gallery hours are: Monday to Friday, 10am to 4 pm; Wednesday, 10am to 8 pm; Sunday from 12 to 5 pm; and closed Saturday.