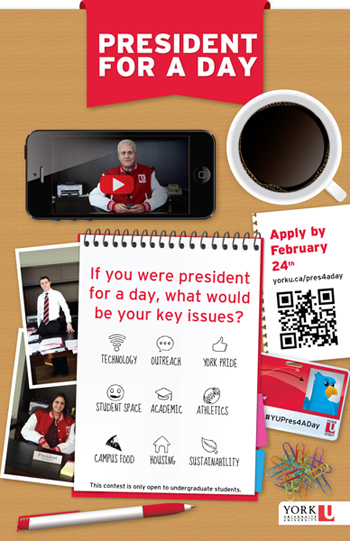 It was the risky academic equivalent of Freaky Friday, but two years ago when York University President and Vice-Chancellor Mamdouh Shoukri swapped roles for a day with York University undergraduate student Rabia Sajun, they did more than gain an appreciation of what it’s like to be in each other’s shoes. They also made history.

In what was a first for a Canadian university, York launched its “President for a Day” contest in February 2012, an opportunity for an undergraduate student to experience a day in the life of York’s president.

“This has become an event I look forward to,” says Shoukri. “I had many interesting experiences swapping roles with Rabia and David and seeing the University through their eyes. It is also a great way for me to interact with the York community.”

Shoukri will break out his backpack and attend the  winning student’s classes and other on-campus commitments, while the student will attend the president’s meetings and partake in other obligations and duties.

If you are a York undergraduate student and think you have what it takes to be President for a Day, or if you know someone who might make a good candidate, submit a resume and a 500-word written or video essay on the topic, “What would be your top three priorities that would directly impact students if you were appointed president of York University?”

All submissions must be received no later than 11:59pm EST on Feb. 24. The submissions will then be reviewed by a selection committee, and the winner will be announced on March 10.