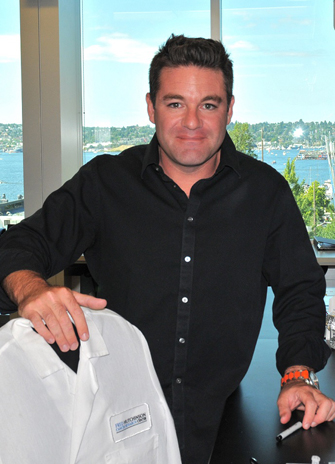 Bielas is the lead researcher on a project that has developed a new DNA test to predict ovarian cancer survival. His publication in the journal Science Translational Medicine highlights the new research and his findings.

The recipient of Governor General’s Gold Medal when he graduated from York University, Bielas is now in his fifth year as a faculty member at the Fred Hutchinson Cancer Research Center (FHCRC) in Seattle, WA.  Bielas and his team developed a new method to accurately count a distinct class of cancer-fighting cells, called tumor-infiltrating T lymphocytes (TILs), in women with early stage and advanced ovarian cancer. The process shows promise as it can foresee how long ovarian cancer patients will survive and accordingly guide treatment methods.

“We have developed a new method that would better advise physicians on the best method for cancer therapy,” says Bielas. “As we are now able to accurately count TILs in tumours, we may be able to improve patient treatment and survival.”

When tested on samples from 30 women with ovarian cancer, researchers found that higher TIL levels were akin to better survival rates. In women who survived more than five years, the percentage of TILs was three times higher than in women who survived less than two years.

The test also may have a broader scope beyond ovarian cancer and could be useful with other types of cancer. To learn more about this study and other research under way in the Bielas Lab, visit the FHCRC website.

Ovarian cancer is the fifth most common cancer for women and the most deadly. According to Ovarian Cancer Canada, there are 17,000 Canadian women living with the disease. This year alone, it is estimated that some 2,600 women will receive a diagnosis of ovarian cancer. It is silent, can go undiagnosed and as a result, it is the most fatal women’s cancer. It does not discriminate between young and old.