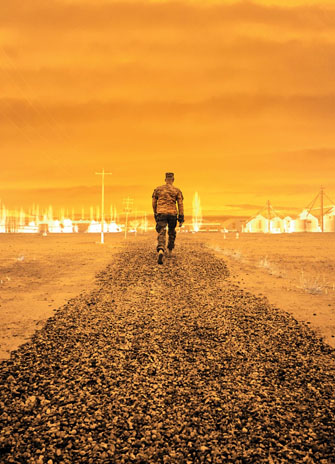 A Soldier’s Tale by Michael Greyeyes

A few years ago, York theatre Professor Michael Greyeyes turned down an invitation to create a new version of Igor Stravinsky’s A Soldier’s Tale. The early 20th-century work about a soldier who makes a deal with the devil was an unusual mix of dialogue, narration and dance, and Greyeyes – an actor, choreographer and director – was ideally qualified for the task. “I said I was much more interested in examining the lives of contemporary soldiers.” The project was never realized, but the idea lived on.

On Feb. 20, Greyeyes’s own A Soldier’s Tale premières at Fleck Dance Theatre at Toronto’s Harbourfront. It is a dance theatre work in two acts that explores the effect of war on two soldiers – one a veteran of the Second World War and the other, a casualty of the recent Iraq war – and how their experiences touch those close to them.

“I’ve always been intrigued by the lives of soldiers,” says Greyeyes, whose father served in the armed forces. When he was growing up in Saskatchewan, veterans were always given a place of honour at every feast or gathering of his Cree community. “Warriors have always held a special place in our culture, as our protectors.”

When Paul Gross cast him in Passchendaele, Greyeyes says the experience of filming at night, in the rain, in the cold reminded him how brutal the real war must have been. “I was struck by the sacrifice, the toll it took on young people to see their comrades die next to them.” With A Soldier’s Tale, “I simply want people to understand that war has real costs.”

A Soldier’s Tale was conceived, choreographed and directed by Greyeyes and written by Tara Beagan, artistic director of Native Earth Performing Arts. It examines the ugly realities of war, reminding us that the reasons we wage war are irrelevant to those on the front line and its horrors do not lessen with time. “It’s a keenly political work,” says Greyeyes.

Act 1 is titled “Soldier Boy”, a reference to a plains honour song Greyeyes first heard as a child about young native men fighting overseas. “It got me thinking about that generation of men who fought in the Second World War.” When they came home they rarely talked about their experience. “I was interested in their silence. Many endured horrible experiences and spent the rest of their lives dealing with the aftermath.” Today, we call it post-traumatic stress syndrome. “I really wanted to tell the story of the veteran who must confront the darkness in his soul.”

Act 2, titled “Ghosts”, is set in the deserts of Iraq and examines how the lives of a US soldier and an Iraqi insurgent are tied irrevocably together. In this act, dance takes the forefront in the narrative, allowing the audience inside the subjective experience of the soldiers.“I really want to challenge the audience to understand that despite the passage of time, the reality for soldiers doesn’t change. Their experience on the front lines is always the same: horrific, dehumanizing, terrifying. I want the audience to be reminded that by our complicity and passivity war is normalized. We war so easily.”

In form, A Soldier’s Tale is unusual for its smooth blend of dance and dialogue. Greyeyes and Beagan deliberately veered from the usual episodic delivery – talk followed by dance followed by talk. “We wanted to break from the paradigm and tell the stories seamlessly as a mix of spoken text and dancing.”  Signal Theatre, Greyeyes’s company, has enlisted some of Canada’s most renowned dance artists and actors to perform in A Soldier’s Tale. And it has brought together a production team that includes York theatre professors Shawn Kerwin as set and costume designer, and Elizabeth Asselstine as lighting designer.  Music was composed by John Gzowski. Greyeyes also collaborated with choreographer Yvonne Chartrand, an authority on Métis dance, to incorporate Métis jigging in Act 1, set in the Saskatchewan prairie.

A Soldier’s Tale will be presented by DanceWorks, Toronto’s longest running contemporary dance series, from Feb. 20 to 22 at the Fleck Dance Theatre. Tickets are available by calling 416-973-4000. A York University student and staff discount can be redeemed with code SOLDIER.

A Soldier’s Tale will also be performed in June as part of the Canada Dance Festival at the National Arts Centre, who are both co-producers.