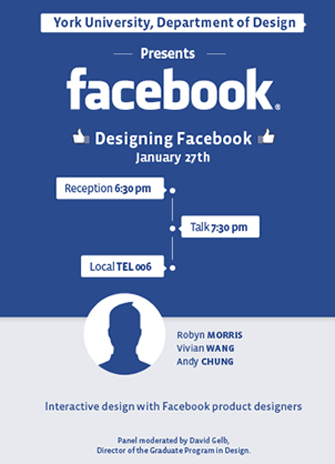 In the highly competitive social networking industry, it’s a case of innovate or be left behind. Companies are constantly on the lookout for new talent and ideas. So when the social networking juggernaut Facebook asked if they could send a team to visit the Department of Design in York University’s Faculty of Fine Arts, it was pretty clear something special had caught their attention.

That “something” is the calibre of work being produced by students in York/Sheridan Joint Program in Design (YSDN) and in York University’s Graduate Program in Design, specifically in the areas of interactive design.

The Department of Design and its programs captured the attention of the social networking giant when two YSDN students, Sarah Hum and Wayne Spiegel, secured internships at Facebook headquarters in Menlo Park, California in a highly competitive process. The work Hum and Spiegel did during their internships last summer so impressed the company that plans were made to send a delegation north to check out the program.

Three Facebook product designers accompanied by a recruiter will visit York Jan. 27 to 29 to meet with Department of Design faculty, undergraduates and graduate students. Product designers Vivian Wang, Andy Chung and Robyn Morris, along with Facebook recruiter Josilin Torrano are making the pilgrimage north. While here, they will participate in class critiques, conduct presentations and interview YSDN students for potential internships and new grad hires.

The Facebook team will also participate in a public panel discussion on Monday night. The panel, which will be moderated by Professor David Gelb, director of York University’s Graduate Program in Design, is titled “Designing Facebook”. It takes place Jan. 27 at 7:30pm in Room 006 in the Technology Enhanced Learning (TEL) Building on York University’s Keele campus. The panellists will talk about their work and what the design culture at Facebook is like. They’ll answer questions submitted by students to a Facebook event site (offered by invitation only) and will also respond to questions from the floor.

For his part, Gelb isn’t surprised (well maybe just a little bit) by Facebook’s desire to see firsthand the design talent incubating at York. “The Department of Design has a strong emphasis on interactive design,” says Gelb. “Facebook is very interested in the innovative thinking generated throughout our curriculum and how our students move through the design process. We ask our students to continually reflect on their intentions as designers and be critical of their own work.”

In addition to its emphasis on interactive design, Gelb says the undergraduate program has a strong core in visual communication, which serves to enrich the entire process of interactive design, from research and ideation to building wireframes and scenario maps, to the final product.

“Students spend their first two years developing a solid foundation in form-making, typography and interactivity. In the upper years they then integrate their knowledge and skills into contemporary applications, such as mobile interfaces, interactive environments and digital publications,” says Gelb.

As part of their curriculum, YSDN students complete a design internship between their third and fourth year of studies. (Hum did two: she completed an internship at Google prior to joining Facebook.) For students, the internships offer an opportunity to follow their interests in professional settings that reflect the diversity of the career options ahead of them, from editorial design to interactive design and motion graphics.

“Many of our alumni have established their own successful design studios. They support the internships and return to campus to hire our new grads,” says Gelb. “Our students complete an intensive design education at York, ready to meet 21st-century challenges and Facebook has taken notice!”

Launched in 1999, YSDN is the first and largest Bachelor of Design degree program in Ontario.  It combines the faculty and resources of two leading institutions in the field:  the Department of Design in the Faculty of Fine Arts at York University and the Faculty of Animation, Arts and Design at Sheridan Institute of Technology and Advanced Learning. The intensive, four-year honours program focuses on professional education in visual communication, information design and interactive design, informed by design history and theory and enhanced by course offerings in other fine arts disciplines and the university at large.