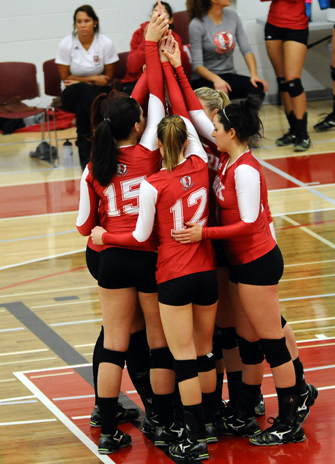 The York Lions women’s volleyball team prior to a game.

The York University Lions women’s volleyball team welcomes the Queen’s Gaels to the Tait McKenzie Centre on Sunday, Jan 26, for the squad’s inaugural Dig for a Cure charity game. The contest will begin at 2pm, and comes one day after the Lions also host the Royal Military College (RMC) Paladins on Saturday at the same time. Both games can also be seen live online on LionsTV.

Ticket sales from the match, as well as proceeds from an auction and prize draws, will be donated to the Canadian Cancer Society.

The Lions continue to be one of the top teams in the Ontario University Athletics (OUA) and remain the highest OUA team in the Canadian Interuniversity Sport (CIS) rankings, this week at No. 7. Last weekend’s 3-1 win over the Brock University Badgers improved them to 11-2 on the season. They are still two points behind the University of Ottawa Gee-Gees for top spot in the OUA East standings, but have two games in hand and own the tiebreaker, should the teams finish with the same record at the end of the year. Their only losses of the year came against the nationally ranked Gee-Gees and to the Ryerson University Rams in their first game of 2014 two weeks ago.

The Lions have dropped only 10 sets in 13 matches, the lowest number in the OUA. They have just six games remaining on the schedule and only two left against opponents with winning records, including Sunday’s match against Queen’s University Gaels.

The Lions have been without their top two scorers – Brandie Wilkerson and Melissa Humana-Paredes  – for the last several matches but in that time have seen other members of the team step up. Middle blockers Brittney Hopley and Michelle Pierce are both among the OUA’s top 20 in scoring with 3.27 and 3.22 points per set, respectively, while libero Jennifer Black is sixth in the OUA with 3.88 digs per set, and setter Kirsten Dillon is fourth with 10.11 assists per set.

The Gaels have had a solid campaign and currently own a 7-6 record but are currently in danger of missing the playoffs with a fifth-place standing in the ultra-competitive OUA East standings, where only the top four teams will qualify. The squad is 2-2 since returning to action in 2014, with wins over the University of Waterloo and, most recently, Western University, as well as losses to Guelph University and the University of Windsor. The Gaels will need to win the majority of their games down the stretch if they hope to reach the post-season as they are currently four points out of the fourth and final spot.

Queen’s has been led in scoring this year by outside hitter Kelsey Bishop, who is tied for sixth in the OUA with 3.80 points per set.

RMC comes into the match this weekend with a 3-10 record, posting wins over Nipissing, Lakehead and Waterloo universities to surpass last year’s win total of two. With just six wins over their 13 matches, the RMC Paladins are one loss away from being eliminated from the playoffs. They will be looking to snap a three-game losing streak on Saturday, falling to Guelph, Western and Windsor over the last two weeks.

RMC’s leading scorer this year is middle blocker Chelsey Litjens , who ranks 11th in the OUA with 3.56 points per set.

After this weekend the Lions will be on the road for their next four matches, with long road trips to London, Ont., Windsor, Ont., and Thunder Bay, Ont., on the schedule. They begin with a game against the Western University Mustangs on Saturday, Feb. 1 at 6pm, and will play their final regular-season home game on Sunday, Feb. 9 against the Nipissing University Lakers at 2pm.