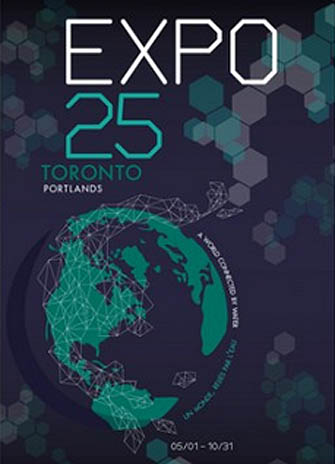 On Monday, Toronto’s economic development committee is considering the feasibility of Toronto hosting Expo 2025. The event may be 11 years in the future, but the deadline to submit a bid looms in 2016. Ten York design students will help them visualize the prospect.

They will be unveiling their branding concepts for a possible world exposition on Toronto’s port lands. Councillors will hear their design rationale and see it applied to logos, posters, ads, brochures, websites, smart phones, even QR tickets.

Students in the Communication Design II course usually design promotional materials for any festival they choose. But this year their professors, Zab Hobart and Gary Leroux, asked them all to work on designs for the same one — Expo 2025. Hobart came up with the idea after a chance meeting with city councillor Kristyn Wong-Tam, who leads the push for Toronto to host the event.

Because Expo 2025 has never happened and is so far in the future, the assignment “gave students a chance to think in a broad way, to blue sky ideas about the future,” said Hobart. She asked them to picture the city in 11 years, to imagine what issues Torontonians would care about. The resulting designs were based on a variety of themes, including environment, education, architecture, water and history.

“Most of the students are in their early 20s so Expo 2025 is half their lifetime away,” said Hobart. “Nevertheless, they are using their design thinking training to develop thematic possibilities that could be integrated into a bid or the event, should the world’s fair come to our city.”

Monday will be the second time students have presented their Expo 2025 designs. On the last day of class before the winter holidays, Wong-Tam invited them to city hall to show their designs to councillors supporting the bid, then the Ward 27 councillor tweeted about it and posted the design images on her website.

“Everyone was thrilled to see the beginning of an idea come alive,” said Hobart. “The designs made the idea more tangible and less abstract, and opened up possibilities for different approaches.”

“This was a great project,” said Hobart. “It allowed students to work on a real world project with real clients. It allowed them to stretch their imaginations in ways they normally wouldn’t just because this event could really happen.”

It has also forced them to articulate their design rationale in formal presentations to real clients. “That experience has given them confidence. It empowered them,” says Hobart. “They felt like they were making a difference.”

City council will vote Feb. 19 on whether to pursue the Expo 2025 bid.