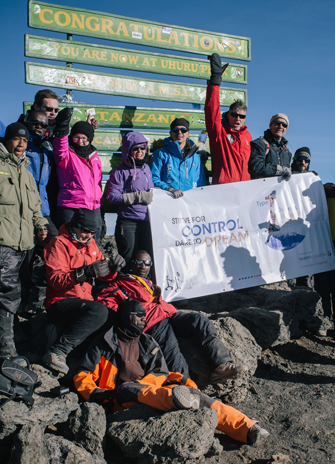 At 5,000 metres above sea level even lifting your arm to take a swig of water from a bottle is exhausting. Walking slows to a literal crawl, but your heart is racing as if you’re completing a marathon. “I felt like a 90-year-old arthritic person,” says York kinesiology Professor Michael Riddell who climbed Mt. Kilimanjaro in November to help raise awareness about Type 1 diabetes and feats that people with the disease can accomplish.

Riddell has Type 1 diabetes. A researcher in York’s School of Kinesiology & Health Science in the Faculty of Health, he joined a team of 14 – 12 had diabetes of which two were doctors – participating in the Type 1 Diabetes Kilimanjaro Expedition, part of the World Diabetes Tour. A third doctor did not have diabetes. Climbing the tallest mountain in Africa (5,895 m) comes with its risk. People die on the mountain trying to reach the summit. “With diabetes your risk of having an adverse event does rise,” he says.

And after you pass the 4,500-metre mark, if anything happens, a helicopter can’t reach you.

With diabetes, the climbers had to constantly be aware of their blood sugar levels and check them regularly. Not only did the exercise make it more important to check at shorter intervals, but symptoms of high altitude stress mimic those of low blood sugar. “I kept checking my blood sugar level, but it was usually fine even though I was feeling light-headed, weak and had a headache,” says Riddell. “Up there you lose the ability to gauge your blood sugar level by how you’re feeling.” The other challenge was keeping the insulin from freezing and the blood sugar metre working in the cold.

High altitudes can also play havoc on a diabetic person’s blood vessel health and kidneys so the importance of a rigorous going over by various medical professionals, including a cardiologist, before the climb was necessary. Diabetes is the leading cause of cardiovascular disease, stroke, blindness and kidney failure. Riddell’s research examines the health benefits of exercise on diabetes and how stress impacts blood sugar control – two things that were relevant on this trip.

Riddell trained by climbing hills around Ontario with a backpack strapped to him and hitting the elliptical machine for three months. In hindsight a little more preparation for going down the mountain would have been good. Even so, Riddell was not only the oldest diabetic in the group he was also the first to reach the summit.

The climb occurred over seven days and had a higher success rate than the average non-diabetic climbing group, with an 86 per cent success rate compared with the usual 70 per cent. Two of the climbers were unable to continue to the summit because of altitude sickness, not anything related to diabetes.

About a third of the people who reach the summit have to be assisted on the way down, says Riddell. “A lot of people get to the top, but they don’t have enough energy left to make it down.”

Over all, it was an exceptional experience. Together the group had some 200 years of experience with diabetes and exercise, which meant they had plenty to discuss and share each night. Friendships developed and plans for future adventures forged.

It was also beautiful, says Riddell. “The mountain changes into four different climate zones. At the bottom, it’s lush and there are baboons, elephants and leopards. When you get above the clouds, you can see the mountain summit and when the sun rises over it, it’s gorgeous.”

That and letting other people with diabetes know that “you can achieve pretty remarkable things even with the disease” was well worth it, he says.