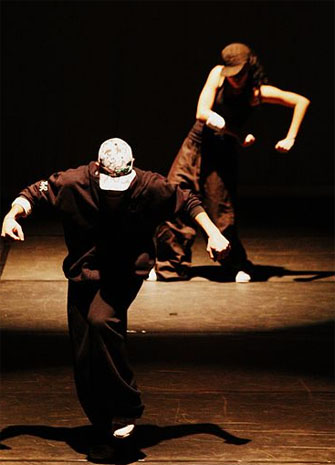 Simon Black grew up in Meadowvale, a diverse working class neighbourhood in Mississauga, where hip hop was all the rage when he was young. His sister was immersed in everything hip hop and as a kid, he tried break dancing, performed rap and later DJed at university. “Hip hop was fun and exciting.”

Rap was his generation’s music, breaking, his generation’s dance, graffiti, his generation’s art. Two years ago, the 33-year-old York PhD student created a third-year credit course in urban studies called Hip Hop and the City. He’s taught it three times and each time it fills up fast. It is so cool, Toronto’s Spacing magazine listed it among the “10 Amazing Urbanism Classes to Take at University” in its fall 2013 issue.

Here’s what the magazine wrote on page 48: “York, while located in a decidedly post-war suburban setting, has been pushing the boundaries of urban research and study with its CITY Institute at the helm. Its new Hip Hop and the City course embodies that innovation.”

Hip Hop and the City is not a music course, though students do analyze rap lyrics and videos. It is an urban studies course that explores city issues through the lens of hip hop culture.

“Hip hop is arguably the most influential cultural movement to have emerged in late 20th century America,” writes Black in his course introduction. “From its humble

beginnings in the South Bronx, hip hop has grown into a global phenomenon.” In all its manifestations – rap, graffiti, breakdancing and DJing – it has become one of the signifiers of the modern urban experience, he writes. It has given voice to poor, marginalized inner city kids everywhere, he says, and become a resistance culture whose message is loud and clear: We’re here!

The course starts in the 1970s when hip hop emerged from the street culture of poor and working class African-American and Latino youth in the US. It examines the historical context, then moves on to explore contemporary topics through the lens of hip hop, including: the politics of public space; street gangs and youth violence; the suburbs; multiculturalism; gender and sexuality; and the underclass debate. Students often tell Black: “I never thought I could study something like this in university.”

Classes are full of variety. They feature lectures, analysis of rap lyrics and videos, films, guest speakers, field trips and lots of discussion. It can be a heady mix.

For instance, after Black gives a class on the history of graffiti in New York and discusses the art form as a response to social problems, he takes students to the intersection of Yonge and Dundas streets in downtown Toronto. There, in a public square plastered with giant commercial ads, he talks about what government crackdowns on graffiti say about power relations in a world dominated by corporations.

One of the most exciting classes is about aboriginal hip hop, says Black. “In cities like Winnipeg and Regina, aboriginal hip hop is huge.” Through it, his students learn about colonization, the impact of residential schools and the experience of First Nations youth in urban Canada. During this class, DJ Miss Melissa, a radio host for Winnipeg hip hop station STREETZ FM, spoke to students via Skype.

There’s a class on the hip hop of Montreal’s emigrant youth, a hybrid culture caught between anglophone and francophone worlds. There’s another on queer hip hop, illuminating how queer youth negotiate urban space in Toronto; that one featured a guest appearance by award-winning activist, artist and educator Kim Crosby.

One week, Black invited two former gang-involved youth to tell the class what hip hop meant to them. They talked about how they used rap to get through their darkest moments. Rap allowed them to express their experience in a way they couldn’t in any mainstream way. “That was a powerful week,” remembers Black.

Black is the son of working class British immigrants who instilled in him an awareness of social and economic inequality. When he won a scholarship to go to university, he studied sociology and later labour and other social movements to understand inequality and the struggle to overcome it. After earning a BA and MA, the Fulbright fellow moved to New York City to start a PhD at the New School for Social Research.

The idea for the hip hop course came during a class on black social movements at Columbia University. Black was amazed when the professor drew links between social and labour movements, hip hop culture, and Afro-American and Latino diasporas. Maybe, Black thought, he could incorporate hip hop into curriculum one day.

Black saw his chance at York. He’d returned to Canada to complete his PhD on child care and low-income single mothers in New York City, drawn to York’s Political Science Department by its “critical mass of scholars who look at the world from alternative perspectives.” But it was while taking a course in urban studies that he “realized hip hop can tell us a great deal about the city.”

Five years later, Black presented the course proposal and urban studies Professors Doug Young and Lisa Drummond championed it. “It’s been a really popular course,” he says. And it will be offered for a fourth time this summer.

While pursuing a university education, Black has been active as a writer and anti-poverty advocate. He has been a regular contributor on politics to hip hop magazine POUND and the anti-poverty newspaper The Tough Times. He writes a sports column, from a radical’s perspective, for the progressive bimonthly Canadian Dimension. His writing has appeared in The Independent, the International Socialist Review, Relay, New Labor Forum, and on rabble.ca. He also contributes op-eds on urban issues to the Toronto Star. In 2004, he won 10 per cent of the vote – the highest ever – for the federal New Democrats in Mississauga-Erindale.