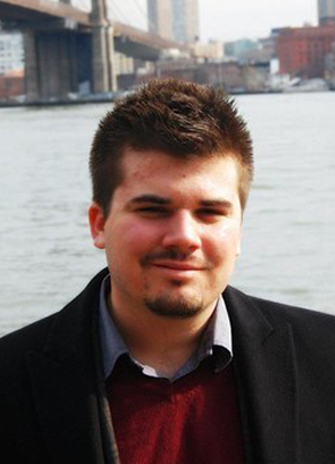 Last Friday evening, York music student Jared Tomlinson sat in a pew at the Church St. Mary Magdalene in Toronto. He was there to hear the church’s Gallery Choir give the premier performance of his composition, The Mass of St. Mary Magdalene. The performance was part of his $5,000 prize for winning the church’s international choral composition competition for a new setting for the mass to mark its 125th anniversary.

His five-part choral mass was presented as part of a recital of works composed for the church over the years. “Absolute joy is the only way I can describe how I felt,” said Tomlinson this week. “It was even better to hear it on Sunday in the liturgical context,” he said. “It was meant to be sung for worship.”

The Mass of St. Mary Magdalene is performed in five movements – Kyrie (“Lord have mercy”), Gloria (“Glory to God in the highest”), Credo (“I believe in God, the Father almighty”), Sanctus & Benedictus (“Holy, holy, holy”), Agnus Dei (“O Lamb of God that takest away the sin of the world”). It lasts eight and a half minutes.

Tomlinson’s mass will be performed during Sunday morning services as part of the downtown Anglican church’s regular rotation of repertoire. St. Mary Magdalene is reputed for its original music, much of it composed by the renowned Healey Willan, its music director for almost five decades. The choir sings from a gallery at the back of the church, which has wonderful acoustics, says Tomlinson. He composed his mass with the space in mind.

York music Professor Stephanie Martin was also a music director at St. Mary Magdalene. She encouraged Tomlinson to enter the competition and he credits her for his love of sacred music.

Tomlinson is the son of a Baptist minister and a former church organist. A fan of Jane Austen, J.R.R. Tolkein and C.W. Lewis, Tomlinson says he intended to study English. “I had romantic ideas about being a professor,” he said. But he had applied to York for music and his piano audition went so well, he changed his mind. “I’m glad I did. I am a devout Christian and I want to invest my life in sacred music. It is what I was meant to do.”

Winning the prize “was a good sign” and it has already opened the door to many other opportunities, said Tomlinson. “In the past month, I’ve gone from wondering how I would make a living to believing I’m going to be able to do this. It’s been huge.”

After graduating this spring, he will keep his day job with a tree-care service and compose music as much as he can in his free time. Sacred choral music is his first love, but he’s also an aspiring film composer who’s scored at least 10 student films.

This is not his first award for composing. Tomlinson has won the Young Singers Award in Durham twice for his compositions Irish Blessing and From Ocean unto Ocean.