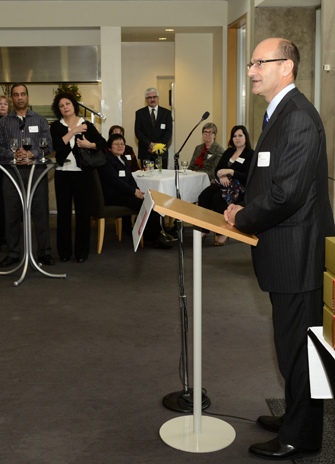 contributions of 125 long-serving staff who collectively have served the University community for over 3,870 years.

In his welcoming remarks, Brewer outlined how York University had changed over the last 54 years. “Our honoured guests who started, more than 40 years ago to work for a fledgling university in ‘northern Ontario’, will remember an emerging University campus with few buildings and less than one-quarter of our current student population…and perhaps some itinerant animals refusing to give up the farm,” said Brewer. The best indicator of the dramatic growth of the University is reflected, he said, in York’s enrolment numbers. The total student population in 1968 was 13,027; between 1973 and 1978, it was just over 21,000 and between 1983 and 1988 York University had just over 32,000 students.  “We have grown a bit since then – today that number is nearing 54,000.”

Shoukri then offered a toast to those being celebrated and thanked them for their devotion to the University. “It is your effort and hard work that has made it possible for me to stand here and speak about how proud I am of York University,” he said, thanking the staff on behalf of current students, faculty and staff, and alumni.

In the past 45 years she said, York University has presented its employees with the kinds of opportunities and challenges that make for a good working life. “I am sure we all have our memories about the early days of our employment,” said Lewis. “For me the adventure with York began before I came to work here. It began when I arrived at the Glendon campus as a student in 1965.

“I have very clear and happy memories of that time,” she said, “for one thing, I came from Alberta so I had never seen an Ontario fall and it isn’t much of an exaggeration to say that I couldn’t believe my eyes! I thought it was fabulous and Glendon was heaven.”

After moving to the Keele campus two years later, Lewis said she was happy to have her own snug room in the brand new Winters residence. “Some of you may remember that in those days, there was daily housekeeping service:  our rooms were cleaned and our sheets changed.  What a treat!”

“York has certainly changed as Canada has changed and we should rightly be proud of having been part of the transformation of a small university on a farm, on the outskirts of everything, to a large, increasingly urban, comprehensive teaching and research institution located in what is really a beautiful   park in the middle of the largest urban area in Canada,” said Lewis.

“While of course  there have been many days where I have felt weighed down by the complexity of the work I do, I remain very grateful for the stimulation that work has given me, and for the chance to get to know so many of the wonderful people who feel as strongly about York as I do.”

She ended by congratulating all of the long-serving staff at the event. “I hope  you agree that we are  very lucky to have spent our working years engaged in something more than earning our daily bread: that there is in fact some of that honey on it because we have been  part of the creation of this great university.”

Gary Brewer then provided a snapshot of what was happening in Canada and the world, taking employees back to the year they started their careers at York University

In 1968, Pierre Trudeau won the Liberal Party Leadership and went on to win a majority government the same year, replacing Lester B. Pearson as prime minister. Ontario Premier John Robarts was busy promoting national unity while the newly created  Parti Québécois, under its first leader, René Lévesque, promoted separatism. The Green Bay Packers won Super Bowl; the Detroit Tigers took the World Series and the soap opera One Life to Live made its début on television. The laws creating Canada’s Medicare system comes into effect and the IMAX technique is invented. The US is in the throes of the Vietnam War and the Civil Rights Movement is forging ahead. Robert F. Kennedy and Martin Luther King are both assassinated. Around the world, violent student protests erupt in Italy, France, Mexico and Poland, and the Black Power movement emerges in the United States. The first Big Mac goes on sale for 49 cents.

Canada’s Prime Minister is still Pierre Trudeau and Bill Davis is settling in as premier of Ontario. The Economist names Canada the “Best Country to Live”. The first Gay Pride Week takes place in Toronto and Vancouver – the event is not recognized by the City of Toronto and permission to march on Yonge Street is denied (Toronto now has one of the largest, best organized Pride Week in the World). In the United States, President Richard Nixon resigns to avoid impeachment due to the Watergate scandal. The US brings home its last soldier, ending its involvement in the Vietnam War. The first hand-held cellular call is made in New York City. The Bee Gees, the Rolling Stones and Ann Murray had hit songs.

Trudeau and Davis are well established in their respective roles.  Davis stops the construction of the Spadina Expressway into Downtown Toronto. In the US, Jimmy Carter is the President. The New York Yankees clinch their 22nd World Series championship, defeating the LA Dodgers. In the world, Pope John Paul II is installed in the Vatican. Louise Brown, first test-tube baby is born.  The Deer Hunter wins best Picture at the Oscars.

In Canada, Trudeau is still prime minister and Davis is in his 12th year as premier of Ontario, but there are many ‘firsts’ in our country and the world.  Bertha Wilson is appointed Canada’s first female Supreme Court Justice and Jeanne Sauvé is appointed Canada’s first female Governor General. In the US, Vanessa Williams becomes the first African-American to be crowned Miss America. The Space Shuttle Challenger carries Guion S. Bluford, the first African-American astronaut, into space. Michael Jackson’s video for “Thriller” is broadcast for the first time; Microsoft Word is first released. The lowest temperature on Earth is recorded in Vostok Station, Antarctica with -89.2 C (-128.6 F).

Prime Minister Brian Mulroney and US President Ronald Reagan sign the Canada-US Free Trade agreement. David Peterson defeats Frank Miller to lead Ontario with a minority government. The Canadian dollar is at an all-time low of 70.2 cents US. Ronald Regan is the outgoing president, succeeded by George H. W. Bush.