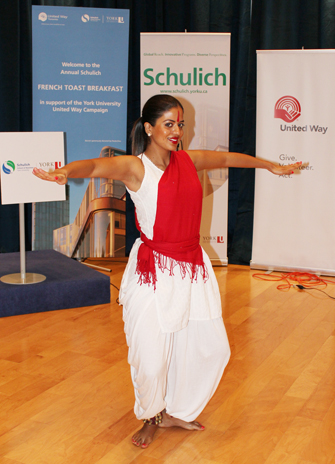 The Schulich French Toast Breakfast, a highlight of York University’s United Way campaign, took place on Tuesday where talented students performed for a full house in the CIBC Marketplace.

From left, Chandni Samal and Adarsha Datta, both MBA students at Schulich, enjoy breakfast before dashing off to classes

It was another successful event with $948 being raised one toonie at a time for the United Way.

“The United Way Toronto helps strengthen individuals, families and communities by supporting services that improve peoples’ lives,” said Sharon Chisholm, chair, 2013 Schulich United Way Committee. “The annual Schulich French Toast Breakfast is our way of contributing to the betterment of our community and I would like to express my sincere gratitude to everyone who came out to support this worthy cause on Tuesday. Special thanks to our talented student musicians, energetic ambassadors and dedicated United Way

Committee members who worked tirelessly to make this day such a huge success.”

Since the York Cares United Way Campaign kick-off, more than 330 members of the York community have contributed more than $147,000 through the on-line pledge system.

“This is remarkable progress. The community of faculty and staff here at York University are highly committed to social justice, and support of the United Way campaign is just one way that we work together to make our communities stronger,” said Jeff O’Hagan, leadership co-chair of the York Cares campaign.

Anyone who has yet to contribute can still do so. The personalized online pledge form will be active until the end of December. So far, eight per cent of the York University community has made a pledge – this year’s goal is to achieve

a participation rate of 13 per cent.

“Thanks to all who have supported this campaign so far,” said O’Hagan. “United Way’s work in building stronger communities is important and York’s campaign goes a long way to support that work.”

Prize draws were held for those who had made their pledge to the campaign during the first two weeks.  The grand prize, an iPad Mini and black leather case, was won by Deirdre Capelli of the Registrar’s Office & Student Financial Services.

Carolyn Heald of the Information & Privacy Office won a York golf bag, while June Hill of the Peter F. Bronfman Business Library and Heather Campbell of the Department of English both won York scarves to keep them warm this winter.

Frances Chan of the Faculty of Environmental Studies each won a copy of the book, Las Nubes Conservation in the Cloud Forests of Costa Rica.

In addition, the Faculty of Health also held a breakfast and lunch Tuesday in support of the campaign for all those who made their way through Vari Hall Rotunda. There were coffee, bagels, sandwiches and more, which raised an additional $481 for the campaign.

For more information about what the United Way does, visit the Toronto United Way website.

For more information about the York Cares United Way Campaign, or to request a personalized donation link, contact yucares@yorku.ca.