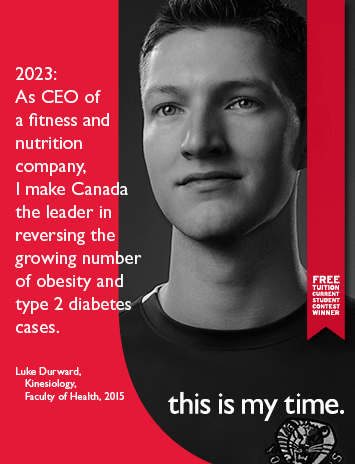 It was the slow pan of a camera and the brief pause on his face that set Luke Durward’s heart pounding. On Nov. 20, the fourth-year Kinesiology & Health Science student was in the middle of a class when York University’s president, accompanied by a camera crew, arrived to announce the winner of the second this is my time free tuition for a year contest.

“My heart was coming out of my chest it was beating so hard and the adrenaline was pumping,” said Durward. “When Dr. Shoukri started reading the winning entry, I couldn’t believe he was reading my vision.”

Durward, 22, who is a Lions track & field athlete (he’s a pole vaulter), was among 5,059 current students who submitted their visions online for a chance to win free tuition for a year. The contest, which celebrates York University’s “this is my time” campaign, showcases the aspirations of York students and their visions for changing the future. It offered a grand prize of free tuition for a year to one current student for stating their vision of the future and how they would put their York U degree to work to make a positive impact on society. Durward’s vision was selected by a pan-University panel of York judges. The top visions were also reviewed by the deans of York’s 11 faculties prior to choosing the winner.

Durward’s winning vision states, “2023: As CEO of a fitness and nutrition company, I make Canada the leader in reversing the growing number of obesity and type 2 diabetes cases”.

As the contest winner, Durward will receive a tuition credit worth $6,200, which he can use up to April 2017.

“Congratulations to Luke, who has developed a unique and inspirational vision that captures his drive and determination to make a real impact in the world,” said York University’s President and Vice-Chancellor Mamdouh Shoukri. “I thoroughly enjoyed presenting the award to him during his class last week, and we at York are very glad to share in helping him realize his goals.”

So what is the secret behind his winning vision?

For Durward, it was all about authenticity. “I put a lot of time and effort into writing my vision,” said Durward. “I found it really interesting to think about what I wanted to do. I wanted a realistic date for realizing my dream of helping people with their weight. I see the continuing rise in obesity rates, ill health and chronic disease and I feel that many of the problems that people are encountering can be solved with sound nutritional strategies and encouragement.”

He is well on the way to realizing his vision. Last year, Durward spent several weeks at home recovering from an accident. During his recuperation, he offered to help his younger brother who, at age 11, was struggling with self-esteem issues due to being overweight. Drawing the knowledge gained through his studies at York University and his experience working with one of Ontario’s top track & field coaches, Durward mentored and coached his younger brother and helped him shed the extra pounds.

“He was my first client,” said Durward. “He had been bullied in school because of his weight and was very unhappy. After breaking my leg, I spent two weeks at home on crutches while I recovered from surgery. I did all of the cooking and worked to teach him about the right kinds of food to eat. He lost 20 pounds and has kept it off to this day. He loved the meals I prepared and he is the inspiration for my vision.”

As a result of working with his brother, Durward has started his own online weight loss coaching business, Luke Durward Fitness and Nutrition. He’s refined the approach he used with his brother to create a company that offers personal coaching and mentoring to people wanting to lose weight. “My clients have offered very positive feedback and are getting good results,” he said.

“Success to me means being able to look back and see how many lives I have changed for the better. Obesity is stressful on the body and mind and I want to help people get their lives back on track, feel better and be healthy,” he said.

Durward said he will use the tuition credit to fund his final year of studies.

The goal of the contest was to celebrate the ambition and goals of current York University students. The contest, which ran from Sept. 25 to Oct. 26 saw close to a 50 per cent jump in entries and proved so popular that on Oct. 2 the contest hashtag, #yorkumytime, vaulted to the top of Toronto’s Twitterverse.

Secondary prize winners were drawn at random from the more than 3,000 shared entries on Facebook and Twitter. The winner of parking for a year was Crawford Luke, a student in the Lassonde School of Engineering. The recipient of the $500 YU-card was Nichole Popov, a student in the Faculty of Liberal Arts & Professional Studies.

Each Faculty also selected a top vision and students were awarded a hoodie sweatshirt from the new “this is my time” American Apparel clothing collection for their top-notch entries available at the University Bookstore today.

2030: With Paralympics Ontario, I open up a Sport Academy for athletes with a disability, providing elite training combined with an education. Hayley Finn

2017: I will be farming the first soil-based rooftop farm in downtown Toronto, teaching food politics to local schools and community groups. Jennie Greven

2022: My graphic renderings are used to 3D-print organs and deliver personalized medicine to thousands of Canadians. Stephanie Strawbridge

2031: My work with the Mental Health Commission of Canada ensures civil liberties protections from discrimination based on mental illness. Aedan Shaughnessy

2024: As a polar researcher, I will contribute to government policies that support responsible, socio-economic growth in northern communities. Gayla Weeks

2025: My research into music-based therapies leads to breakthroughs in treatments for Autism, Parkinson’s and Alzheimer’s. Andrew Lauzon

2032: I oversee the development of the first lunar spaceport, a launch pad for exploration. Shenalie Fernando

2035: As a lawyer, I help create legislation that fosters reciprocity between revitalized Indigenous legal orders and the Canadian legal system. Scott Franks

2020: I will create artificial bone marrow that can be implanted in Leukemia patients using their own DNA information. Seyed Boroomand Soleyman

The contest for free tuition and other prizes is still on for future students and will run until June 2, 2014.