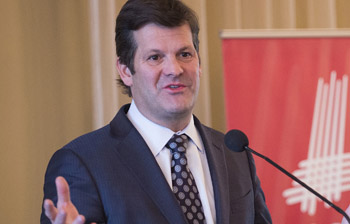 This month saw the first in a series of thought leadership events produced by Maclean’s magazine in partnership with the Lassonde School of Engineering. The Inspiring Innovation series kicked off with a sold-out luncheon featuring a keynote address from Pierre Beaudoin, president & CEO of Bombardier Inc.

The audience of Toronto’s business leaders, industry professionals and Lassonde students listened intently as Pierre Beaudoin, president & CEO of Bombardier Inc., reflected on his firm’s commitment to innovation and the vital role this will play in Canada’s economic future

The audience, which was comprised of Toronto’s business leaders, industry professionals and Lassonde students, listened intently as Beaudoin reflected on his firm’s commitment to innovation and the vital role innovation will play in Canada’s economic future.

“At the Lassonde School we want to bring people together to discuss the issues that matter. Following our hugely successful inaugural Symposium, we’re partnering with Maclean’s to hear from Canada’s most prominent leaders about how we can make our country more innovative,” said Janusz Kozinski, founding dean of the Lassonde School of Engineering. “This was the first of three events featuring globally renowned speakers with guests from business, academia, industry and, importantly, our own Lassonde students. It’s a great opportunity to tell our story and to position York University as a true thought leader in our society.”

In his keynote address, Beaudoin, who leads one of the world’s leading employers of engineers, told the assembled audience that innovation was the most important driver for today’s global economy. “Many international think-tanks are pointing to the growing innovation divide between countries. Some are calling it an innovation emergency,” said Beaudoin. “We need to make sure that Canada is on the right side of this divide. Innovative products, processes and services are a must for any high-performing economy. They increase productivity, income per capita and the quality of social programs. They also enhance our competitiveness and enable us to engage in higher value-added activities.

“The World Economic Forum believes innovation is becoming so crucial to competitiveness that soon it will be more pertinent to distinguish countries based on whether they’re innovation rich or poor as opposed to developed or developing,” he added.

The full text of Beaudoin’s speech is published on the Maclean’s website. The next event in the Inspiring Innovation Thought Leadership series is set for February 2014.