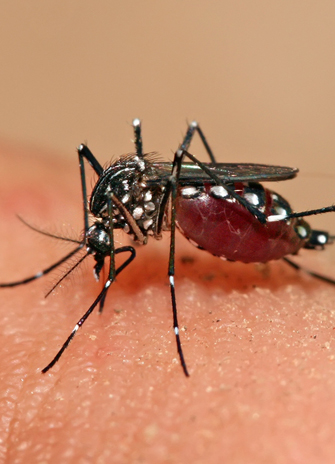 Jean-Paul Paluzzi, a biology professor in York’s Faculty of Science, is a recipient of a 2013 Polanyi Prize, awarded by the government of Ontario to recognize the province’s brightest young researchers. Paluzzi was one of five recipients honoured at a ceremony held in Toronto yesterday. He received the prize in the physiology/medicine category for his research on regulatory hormones in mosquitoes and ticks to control paths for human and animal diseases.

“York University is proud that Professor Jean-Paul Paluzzi was awarded the John Charles Polanyi Prize this year,” said Robert Haché, vice-president research & innovation. “Polanyi Prizes recognize outstanding research programs undertaken by researchers early in their careers and help to support the significant contributions they are making to their fields. This recognition is well-deserved.”

Paluzzi’s research is focused chiefly on blood-feeding arthropods, including mosquitoes and ticks. He examines how the complex neuroendocrine regulatory mechanisms in blood feeding insects function. These regulatory mechanisms promote feeding, signal satiety, regulate growth and development of tissues involved in reproduction, and control ionic and osmotic balance. Using an integrative approach combining molecular, cellular and physiological methods, his research examines the nature of various neurochemicals including biogenic amines and neuropeptides. Additionally, Paluzzi investigates the regulation, expression, and release of neuroendocrine factors as well as the interaction and activation with their cognate receptors and signaling partners in target cells and tissues.

Rhodnius prolixus, also known as the assassin bug, is a vector of Chagas’ disease and one of the blood feeding insects studied by Paluzzi

Little is known on how the physiological stresses related to blood meal engorgement are detected by the nervous system and Paluzzi’s research aims to explain how sensory information is centrally orchestrated to elicit changes in physiology or behaviour. Over the long term, this comparative approach involving different blood-feeding species will explain how different species respond to agents or strategies that interfere with their feeding behaviour, with a hope of controlling how blood-gorging vectors spread diseases such as Malaria, West Nile Virus, Lyme disease and other insect and tick-borne illness.

Each year, up to five Polanyi Prizes are awarded to outstanding researchers in the early stages of their career who are planning to continue post-doctoral studies at an Ontario university. The prizes have a value of $20,000 each and are awarded in the fields of chemistry, literature, physics, physiology or medicine, and economics.