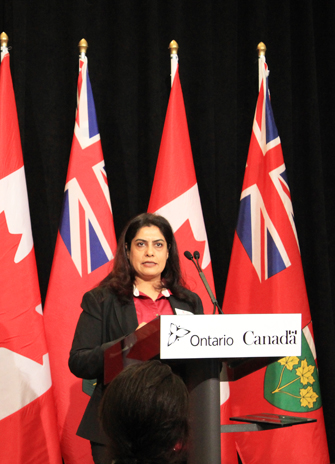 The provincial and federal governments announced at York University Friday that they were expanding the Ontario Bridge Training Program so that thousands of skilled immigrants could get licensed and find jobs in their fields. Ontario will contribute $63.6 million and Canada will invest $16.6 million over three

Michael Coteau, Ontario minister of citizenship and immigration, said “Bridge training is about making the journey easier for internationally-trained individuals who want to put their skills and talents to work in Ontario.”

The program “will help thousands of newcomers over the next three years get the training they need to work in jobs in their fields of expertise,” said Chris Alexander, Canada’s Minister of Citizenship and Immigration. “By supporting this program, our government is providing newcomers with the tools they need to thrive and become members of the Canadian

At York, the Bridging Program for Internationally Educated Professionals offers professional certificates in business, human resource and information technology. In addition, the courses can be used toward earning a professional designation. The program has attracted professionals from more than 30 countries.

“These important programs are also helping to build a more globally connected economy and to support diversity in our communities,” said York President & Vice-Chancellor Mamdouh Shoukri. “York University is the right University to offer these initiatives. We are an ethnically diverse University – a community of 60,000 people who can trace their roots to more than 160 countries. As a glo

bal University, we are proud to be building bridges between Canada and the world.”

One of the graduates of York’s program, Sunitha Kshatriya, came to Canada in 2009 with her family after living and working in India and Dubai. She brought with her a PhD in human resources and an MBA with more than 15 years of middle and senior management experience.

“I was totally unprepared for the three years of struggle I had to undergo to integrate into my profession,” said Kshatriya

When she joined York’s bridging program, she was reluctant and skeptical that it would help her. “I stand here today as a testament and proof of an unbeliever turned into an advocate of this p

rogram because this program works. It walks its talk,” she said.

She learned necessary skills, education and experience, as well as Canadian perspectives that she said she “will build upon for life in Canada and beyond. Bridging programs work”. She believes there should be more such programs and they should be well advertised. They help not only internationally educated professionals transition, but other stakeholders will benefit as well, including the government and the non-profit sector.

The video below shows highlights of the announcement.

“What it would do for new Canadians and their families is immeasurable,” said Kshatriya. She now works full time at the London School of Business & Finance Canada in Toronto as a program leader and as a sessional instructor at a local college. She is also a recent recipient of the Skills for Change/Status of Women’s Leaders in Residence award to mentor other new immigrant women over the next year.

York’s bridging program for internationally educated professionals is a one and a half year certificate program that works to help these professionals transition into a role that matches their education, credentials and experience.