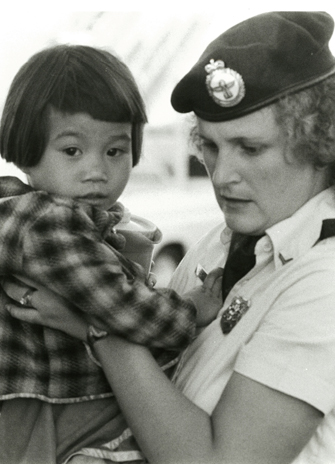 The Centre for Refugee Studies at York University and the Canadian Immigration Historical Society (CIHS) are working together to examine one of the most significant periods of refugee resettlement in Canada’s history.

“The Indochinese Refugee Movement 1975-80 and the Launch of Canada’s Private Refugee Sponsorship Program” conference will take place from Nov. 21 to 23 in the Senate Chamber, 9th Floor, North Ross Building, Keele campus. It will consider, in detail, Canada’s reaction to the escalating refugee crisis in South East Asia. This includes

the role of government, media and the response of concerned Canadians to welcome more than 60,000 refugees.

“This was one of the most significant refugee resettlement efforts in Canada’s history, and a unique effort with unprecedented levels of citizen participation. More than 7,000 groups of Canadians helped to sponsor refugees in this period,” says York University Professor Emeritus Howard Adelman, a founder of Operation Lifeline, Canada’s largest civil society response to the Indochinese Refugee movement. He also established the Centre for Refugee Studies at York

University, which grew out of a project that focused on collecting documents related to the Indochinese refugee movement.

The conference will be preceded and followed by two events that will review, analyze and assess of the current Private Sponsorship of Refugees Program. In all, hundreds of former Indochinese refugees, private sponsoring groups, government officials, stakeholders, academics and policy makers are expected to participate in the events.

Conference co-chair James Simeon, director, School of Public Policy & Administration, Centre for Refugee Studies Scholar, says the organizing committee, in addition to planning the conference, has been putting together a

comprehensive collection of reports, photos, videos and other archival materials to develop an open-source e-platform.

All of this work celebrates the success of the sponsorship program and commemorates the 25th anniversary of the Centre for Refugee Studies. A selection of some of the most innovative scholarly contributions will be included in an anniversary issue of the academic journal Refuge.

It also contributes to a Queens-McGill University Press publication by the Canadian Immigration Historical Society that highlights the experiences of the public officials, which will be released in time for the 40th anniversary of the fall of Saigon in 2014.

This project is a partnership of the Centre for Refugee Studies at York University and the Canadian Immigration Historical Society, in consultation with the Canadian Refugee Sponsorship Agreement Holders Association, and is being funded by Citizenship and Immigration Canada.