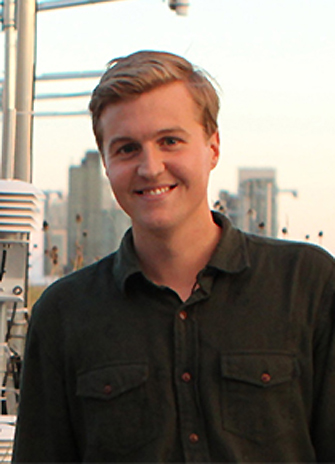 Biology PhD candidate Scott MacIvor has been selected as one of three individuals to be honoured with a Toronto Botanical Garden 2013 Aster Award.

The inaugural Aster Awards, so named for the Greek “star”, are dedicated to celebrating the achievements of “green stars” – artists, designers and scientists whose influence has educated and inspired others to connect with nature.

MacIvor, who will receive the Rising Star Award, is an ecologist with research interests in biodiversity and ecological trade-offs in urban areas and in architectural and landscape design. His doctoral studies at York University with Professor Laurence Packer focus on the community ecology of bees and wasps in cities. MacIvor also coordinates biological research at the University of Toronto Green Roof Innovation Technology (GRIT) lab, where he evaluates the contribution of plant traits and species diversity to green roof performance. He is the recipient of several awards, among them a Governor General’s Gold Medal.

Toronto Botanical Garden praises MacIvor’s research for its ability to “draw us into the natural world and invite us to re-discover, celebrate and protect it.”

The awards ceremony will take place Thursday, Nov. 21 at the Toronto Botanical Garden, with a cocktail reception for 250 to 300 guests from industry, politics, educational institutions, the arts and the public. Also being honoured are renowned Canadian photographer Edward Burtynsky and celebrated architect and York alumna Janet Rosenberg. Artist Charles Pachter and retailer Sandy Stagg serve as honorary chairs, and celebrity chef Christine Cushing is set to host.

“Recognizing ecological research on this scale is great, and important for outreach and education,” says MacIvor. “I’m thankful that my work, that of the Toronto Botanical Gardens and my co-awardees can each uniquely connect people to nature in our city.”