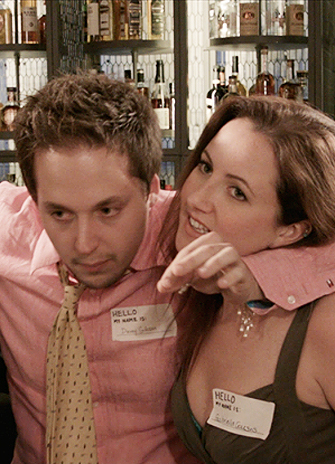 What happens when a briefcase, a detective and a specific line of dialogue – “I know you think I’m being dramatic” – must be included in a short film, written, shot and edited in 48 hours? You get an award-winning short film, All for Davey, the making of which involved a team of 30 people including 14 York staff, alumni and students.

All for Davey premiered Nov. 3 and was chosen to go on to the “best of” screening for the 48 Hour Film Project Nov. 10. It was at the “best of” event that the film won the Best Ensemble Acting award. “Our team was incredible,” says Dave Gibson (BA Spec. Hon ’05) a media producer for York’s Learning Technology Services (LTS) and the film’s lead producer and team leader. “And the caliber of competition was amazing. We’re really proud to be acknowledged within a city with so many talented filmmakers.”

From left, Derek (Ryan Fisher) and Gabriella (Sarah D. McCarthy) in a scene from All for Davey

“It was also quite the experience watching the film on the big screen with an audience, especially when the venue is the Bloor Hot Docs Cinema with hundreds of people,” says Gibson. “It allowed us, the team, to see where the film would need to be tweaked before they submit it to more festivals.”

The film came about after Dianna Lee (BA Hon ’06) of York’s Learning Technology Services (LTS) and associate producer of the film, asked Gibson to join forces and sign up for the 48 Hour Film Project. Over one weekend in October, they led cast and crew members in their quest to complete a four- to seven-minute film at the Cocktail Parlour in Storys, a 170-year-old brick and beam building.

See teaser for the award-winning film All for Davey below.

Creating an award-winning film, however, is a lot of work, but when there is only 48 hours the challenges are even greater. Gibson got right to work setting up a writing team for day one, a production team for day two, and an edit team for day three. “We ended up pulling a lot of favours and with the strong positive vibe of the team we managed to have a very professional cast and crew at a beautiful location,” he says.

From left, Gabriella, Derek, Daisy (Alana Pancyr) and Det. Pierson Vallis (Richard Young) in the film All for Davey

The 48 Hour Film Project sets certain parameters for the story to make sure no one started working on their film before the official start. That’s where the briefcase prop, the character of Detective Pierson Vallis and the line of dialogue came in. All the films have to incorporate those three things. Each team, however, has to work in a different genre. The unofficial York team drew the genre “Buddy film”.

The story concept was created by Richard Young (MBA ’03), a professional ACTRA actor, writer, and filmmaker, along with Ryan Fisher, a professional ACTRA actor, writer, photographer and filmmaker who led things on Day One. Young went on to write the script, and both play major characters in the film. The 48 Hour Film Project has a standing agreement with the Alliance of Canadian Cinema, Television and Radio Artists (ACTRA) which allows their members to volunteer their time and work among non-unionized actors.

From left, Derek, Davey (Jonathan Dubsky) in a still from the film All for Davey

Day Two, production day, had an impressive professional crew lead by director Jonathan Dubsky and cinematographer Andrea Cuda, a Faculty of Fine Arts alumnus. “We shot on one of the best modern digital cameras (Black Magic Cinema Camera) supported by beautiful lenses and lighting,” says Gibson. “Andrea and his crew are exceptional, and the results can be seen in every frame of that film.”

The editing team on Day Three was led by former student and York LTS employee Perry Walker (BA’11), who was the editor and data management technician.

“All days were heavily spotted by other talented York alum as well,” said Gibson.

They were the #BougieProductions team hailing from several of York’s Faculties – Faculty of Fine Arts, Schulich School of Business, the Faculty of Health and the Faculty of Liberal Arts & Professional Studies.

“The experience made me realize what creativity really is,” says Gibson. “It doesn’t need an open field to thrive, creativity flourishes most when you have perimeters and obstacles to overcome – it’s incredible to watch it unfold before you.”

Visit the All for Davey Facebook page to get more information about the team members and see stills from the film.  Gibson has been encouraging people to “Like” their Facebook page to support their efforts, hear festival results, and see the film when they can release it online.