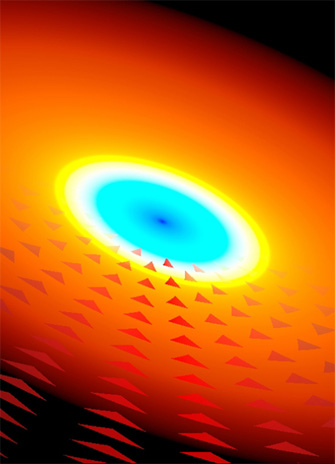 A team of researchers led by York Professor Patrick Hall has discovered some strange behaviour occurring in distant galaxies, observing several cases of gas that is “falling” into black holes at a high velocity.

“Matter falling into black holes may not sound surprising,” says Hall, “but what we found is, in fact, quite mysterious and was not predicted by current theories.”

Using data from two components of a large survey of the night sky known as the Sloan Digital Sky Survey (specifically, the SDSS Legacy survey and the SDSS-III Baryon Oscillation Spectroscopic Survey), Hall and colleagues found a new type of quasar in which gas appears to be heading away and possibly toward the quasar’s black hole.

Illustration of gas falling toward a quasar (an accretion disk around a black hole). The black hole, too small to see, lies at the center of an orbiting disk of gas. The gas particles orbit faster the closer they are to the black hole. Collisions between particles heat up the gas to high temperatures near the center (blue and white colours) and cooler temperatures farther out (yellow and orange colours). The arrows show gas clouds falling towards the black hole. The faster the clouds move away from us, the more they are redshifted by the Doppler effect. Infalling clouds like these may have been detected for the first time in absorption around certain quasars. Illustration by York Professor Patrick Hall

Astronomers have known for more than a decade that every large galaxy has a super massive black hole at its centre, with a mass from millions to billions of times that of the Sun. Matter around these black holes forms a disc bigger than Earth’s orbit around the Sun and hotter than the surface of the Sun. These discs of hot gas, called quasars, generate enough light to be seen across the observable universe.

“The gas in the disc must eventually fall into the black hole to power the quasar, but it’s difficult to confirm that gas is actually inflowing through the disc,” says Hall. “What is often seen instead is gas blown away from the black hole by the heat and light of the quasar, heading toward us at velocities up to 20 per cent of the speed of light. These winds can affect the galaxy surrounding the quasar, and are an active topic of current research in astronomy, including my own.”

Objects like these were not predicted by models of quasar winds, and astronomers weren’t on the lookout for them. “In fact, I found the first case ten years ago,” says Hall, “but thought there had to be some other explanation. No one realized what these objects were until one day, while looking for something else, I spotted one which could only be explained as having gas around the quasar moving away from us at very high velocity.”

Illustration of gas clouds moving toward and away from us, silhouetted by an accretion disk. The same accretion disk as in the previous figure is shown, this time with arrows showing gas clouds orbiting (and slowly moving outward) just above the disk. When the gas clouds move away from us in their orbits, they are red shifted by the Doppler effect (red arrows); when the clouds move toward us in their orbits, they are blue shifted (blue arrows). This “optical illusion” may explain astronomers’ observations of red shifted gas clouds near black holes without having clouds actually falling into the black holes. Illustration by York Professor Patrick Hall.

Such gas is found in only about 1 out of 10,000 quasars, and only seventeen cases are known. This discovery is detailed in a peer-reviewed paper in the journal Monthly Notices of the Royal Astronomical Society, published by Oxford University Press.

Given the strong gravity of black holes in quasars, why would it be surprising to find gas falling into them?

“If the gas is falling into the black hole, then we don’t understand why it’s so rare to see infalling gas,” says Hall. “There’s nothing else unusual about these quasars. If gas can be seen falling into them, why not in other quasars?”

Hall adds, “We do have one other possible explanation for these objects. It could be that the gas moving away from us is not falling into the black hole but is orbiting around it, just above the disc of hot gas, and is very gradually being pushed away from the black hole. A wind like that will show gas moving both toward us and away from us. To make an analogy: imagine an ant on a spinning merry-go-round, crawling from the center to the edge. You will see the ant moving toward you about half the time and away from you about half the time. The same idea could apply to the gas in these quasars. In either case, the gas in these quasars is moving in an unusual fashion.”

Hall says models of quasars and their winds will have to be revised to account for these objects. To help understand what revision is needed, Hall and his students and colleagues are observing these quasars further using Canadian and American access to the Gemini-North telescope in Hawaii.

“This past summer I had a student begin analyzing our Gemini-North observations, and we hope to understand these objects better very soon!” says Hall.