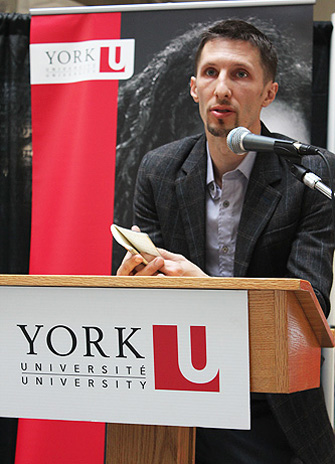 The York Cares United Way Campaign launched Monday with a rally in the Student Centre. As York President & Vice-Chancellor Mamdouh Shoukri aptly remarked, “As a community here at York, we

The rally was also a celebration of the students who climbed the CN Tower in support of the United Way. “Our students have demonstrated tremendous spirit, social responsibility and tenacity as they participated in the CN Tower stair climb. This climb was a symbolic kick-off to our campaign,” said Shoukri. “They are now passing the torch to York’s faculty and staff.”

That would require 564 faculty and staff to contribute.

In recognizing the students who climbed the 1776 steps up the CN Tower, a scarf ceremony was performed on stage where each participant was wrapped in a York scarf.  The scarves were intended to be both practical, particularly at this time of year in Canada, and symbolic, serving as a reminder of the warmth that can result from the simple gesture of wrapping ourselves.  “The scarves also symbolize the sense of community we experience when we share something in common,” said

York alumnus Chris Penrose, executive director of Success Beyond Limits and winner of a 2012 Bruce Bryden Alumni Award as one to watch, also took to the podium. Success Beyond Limits is a youth-focused, community-based non-profit organization working in the Jane and Finch area that receives funding from the United Way. All of its teachers, staff and mentors are from the Jane

“There is a connection to York University as a majority of our staff and teachers also graduated from York University,” said Penrose. “Our summer program brings 150 high school aged students from Westview [Centennial Secondary School] to York University. That includes senior students as mentors and Grade 9s getting their first high school credit before they start high school.” The program is hosted inside York’s Osgoode Hall Law School for six weeks every summer.

The impact of having that program run out of York has been powerful for the youth and has built memories inside the University, said Penrose. Success Beyond Limits was one of the first programs of its kind in the city to offer high school credits and employment.

See more photos of the event, see below: