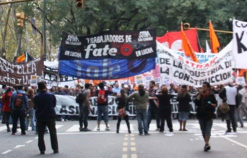 The third instalment in the Global Labour Research Centre’s speaker series is fast approaching, this Thursday, Nov. 7. The next speaker is Maurizio Atzeni, the Marie Curie Research Fellow at Loughborough University in the United Kingdom and Centro de Estudios e Investigaciones Laborales (CEIL/CONICET/CONICET) in Buenos Aires, Argentina. His current research focuses on forms and processes of workers’ resistance and organization among precarious workers in Argentina. He is the editor of Workers and Labour in a Globalised Capitalism: theoretical perspectives and contemporary issues and of Alternative Work Organisations and he is the author of Workplace Conflict, mobilisation and solidarity in Argentina, all books published by Palgrave.  Atzeni has been doing research on the Argentinean labour movement for more than a decade, publishing journal articles and book chapters on aspects of conflict and collective action, workers’ control and trade unionism.

Atzeni’s talk will focus on explaining the emergence of different strategies and forms used by workers to address their concerns, in the context of both economic crisis and changes in capital accumulation strategies. The de-industrialization and recession at the end of 1990s produced a retreat of formally organized workers and their trade unions in favour of forms of social mobilization. The economic growth that began in 2003 has recreated the conditions for the reemergence of the more traditional sectors and organizations of the working class, but in a widespread context of precariousness inherited from 1990. Atzeni will assess the implications and prospects of these various forms of working-class struggle.