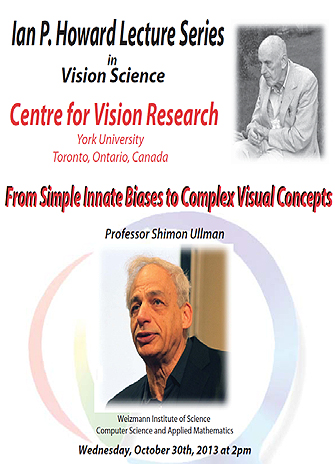 Shimon Ullman, Samy and Ruth Cohn Professor of Computer Science at the Weizmann Institute of Science in Rehovot, Israel, will deliver the next Ian Howard Memorial lecture Wednesday.

The Centre for Vision Research (CVR) hosts the Ian Howard Memorial lectures, a series of talks named for the founder of the CVR, Ian Howard, who died earlier this year. The talks are given by highly prestigious

Ullman, head of the Department of Computer Science and Applied Mathematics, will discuss how infants, early in their development, learn to solve visual problems that are highly challenging for even the most sophisticated computational methods. Two striking examples are learning to recognize hands and learning to follow other people’s gaze direction.

“I will present a model that can imitate infants learning of these concepts. It is shown a stream of natural videos and it learns without any supervision to detect human hands, as well as direction of gaze, in complex natural scenes,” says Ullman.

“The key to the successful learning comes from the use by the system of simple innate biases, which guide the learning process along a path that leads it to acquire useful representations and sophisticated detection processes. The implications of the model go beyond the specific tasks, by showing how learning and innate

mechanisms combine to acquire complex concepts, which are significant to the observer but statistically inconspicuous in the sensory input.”

Ullman is well-known for his seminal book High-Level Vision, pictured

Ullman’s area of research explores the parallels between the processing of visual information by the human visual system, and computer vision. The goals of his research are to understand how the human visual system operates, and how to construct biologically inspired artificial systems with visual capabilities. These goals are strongly interconnected.

The focus of Ullman’s research is visual object recognition and the biological modeling of information processing in the visual cortex. He has recently developed a fragment-based approach to object classification and segmentation. In this approach, objects within a class (such as “faces” or “cars”) are

represented in terms of “image fragments” that are used as building blocks for representing a large variety of different objects that belong to that particular class.

Ullman wrote the introduction for the book, Vision, (pictured) by David Marr, which was reissued in 2010

With inspiration from “natural intelligence”, Ullman has created artificial intelligence systems that could otherwise never have been constructed. And, in the other direction, such models may explain why there are few, if any, neurons that code for objects but many that are sensitive to seemingly random object features and parts. Through his involvement with the company Orbotech, he has also participated in the development of real-world applications of his theories for example in the automated inspection of circuit boards and displays.

Ullman is the 2008 recipient of David E Rumelhart Prize in human cognition and is a member of the Israel Academy of Science & Humanities.

He has published many scientific papers and is well-known for his seminal books, The Interpretation of Visual Motion (1979) and High-Level Vision (2000).  As David Marr’s (1945-1980) first graduate student, Ullman was invited to write the introduction to a reissue of Marr’s classic book Vision (published posthumously in 1982), that was re-released in 2010.