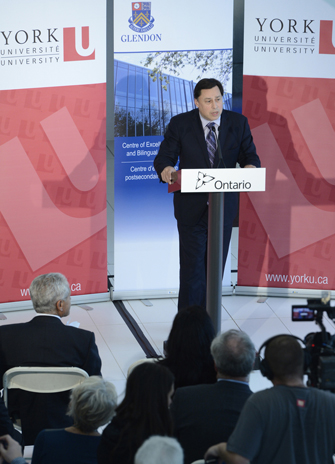 The provincial government announced Thursday at York’s Glendon campus that it plans to provide $16.5 million to help universities and colleges expand French language programs and services, which includes $1.5 million awarded to Glendon for that purpose.

Glendon is using the funds to expand French programing in its communications, foundations of law and psychology,

and business and biology programs, as well as the Language Training Centre.

Thursday’s announcement also included news of a review of Glendon College’s capacity to deliver even more French-language programs, as part of the Ministry of Training, Colleges and Universities, Action Plan for French-language Postsecondary Education.

“York University is proud to partner with the Ontario government in expanding and enhancing programs and services to support French and bilingual education in the province,” said York President & Vice-Chancellor Mamdouh Shoukri. “We appreciate the ministry’s expression of confidence in supporting curricular development at Glendon College, which ensures we are well-positioned to continue educating Canada’s future leaders.”

The Action Plan will increase access to French-language postsecondary education and services in central and southwestern Ontario, giving college and university students more opportunities to study in French and prepare for future jobs. It will allow all francophone institutions, including the University of Ottawa and Laurentian University, to

be eligible for funding to deliver French-language programs in central and southwestern Ontario with a partner college or university located there.

“Working with our education partners, we want to ensure that all our youth have access to the same opportunities,” said Brad Duguid, minister of training, colleges and universities. “Helping francophone students succeed in their own language means greater access to the training and education needed to land good jobs, diversify our workforce, and create a stronger economy.”

The plan will also encourage partnerships among bilingual postsecondary institutions and employment and training services organizations to further increase French-language programs and establish an advisory body on French-language education.

“The action plan will create more options for francophone students, apprentices and other learners, and increase the

The announcement included program expansions that are already underway, not only at Glendon College, but also Collège Boréal and La Cité collégiale.