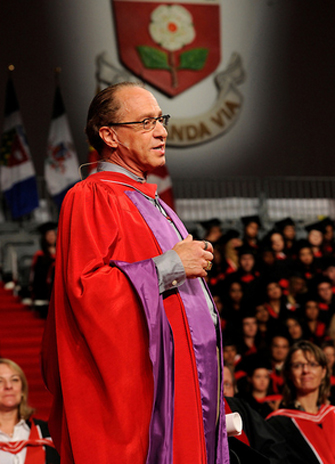 The tools to changing the world are in everybody’s hands, said inventor and author Raymond Kurzweil to graduands in the Faculty of Health Wednesday.

People may not be able to predict the future, but they can anticipate what it will be like, said Kurzweil, director of engineering at Google, who received an honorary doctor of laws degree at York’s Fall Convocation ceremony.

font. His inventions have made a significant impact on society, providing those with visual disabilities the opportunity and independence to pursue education and to access ideas.

“I decided I would become an inventor when I was five,” he told graduands. “My parents gave me all these enrichment toys . . . and I took them all apart and I made this big inventory of little pieces. Then I would go through the neighbourhood and bring back broken radios and broken bicycles and take them apart and add them to my inventory. And I had an idea that if I could just learn how to put these things together I could create transcendent effects.”

By 1981, he realized that “the key to being successful as an inventor was timing. The inventors whose names you recognize . . . they were in the right place with the right idea at the right time, and timing is very critical”.

He knew in 1981 that by the time he finished a project the world would be a different place. “That’s even more true today. There’s been a fantastic acceleration in the pace of technology,” he said.

“We then wanted better ways of producing written language. The printing press took 400 years to reach a mass audience. The telephone took 50 years to reach a quarter of the population in the United States, Canada and Europe. The cell phone did that in seven years. Recently, social networks, wikis, blogs took three years,” said Kurzweil. “So your projects, ideas, have to make sense for the world that will exist when you finish the project, and it will be a completely different world.”

He also realized that the fundamental measures of information technology, like price performance and capacity, are very predictable. Computation, he said, has been a very smooth and exponential, not linear, trajectory since the 1890 America census. However, “linear anticipation is our intuition, that’s hardwired in our brains. So 10,000 years ago, I’m tracking that animal. I’m going this way and it’s coming up the path that way. We’re going to meet up at that rock. I think I’ll go a different way. That became

good for survival; that became hardwired in our brains . . . but basic measures of information technology are exponential and it’s a profound difference,” he said.

“The cellphone I’m wearing is several billion times more powerful per constant dollar than the computers I used in undergraduate, and it will do that again in the next 25 years.”

Beyond having the tools, the ideas and the ability to anticipate the future, Kurzweil told students they also need the power of metaphor and courage. He used the example of Darwin, who borrowed from geology to develop his theory of evolution. Geologists discovered that a small trickle of water at the bottom of canyons, including the Grand Canyon, were responsible for eroding enough rock and earth over millions of years to create huge canyons.

“In The Origin of Species, Darwin says he took this metaphor, this analogy, from geology and said, ‘OK, a little trickle of inherited changes from one generation to another over a hundred thousand generations would carve out a new species’,” said Kurzweil.

Other biologists had abandoned similar thoughts because they were so contrary to the common belief that there was a grand designer who had designed all these species. “Darwin’s conclusion that your pet dog is your cousin, millionth cousin perhaps; the elm tree in the backyard is your cousin too, billionth cousin; we’re all part of a tree of life. This seemed to argue against the special nature of human beings, that we were sort of sacredly designed separate from the rest of creation and it was very heavily attacked,” Kurzweil said.

“The key to his genius is the courage he had to not fall off the horse, to stick with the results of his thought experiments.”

Kurzweil told the students to look for the solution to their problems, “not necessarily where everyone else has been looking, but maybe in a radically different field, and have confidence in your thoughts because it’s only the power of ideas that can change the world.”