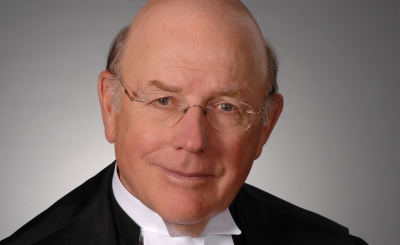 The launch of the institute will coincide with Winkler’s retirement from the bench in December. It will be the only centre of its kind in Canada focused on pursuing new ideas, practices, research and innovation in dispute resolution.

“The Winkler Institute for Dispute Resolution is intended to be both a lasting tribute to Chief Justice Winkler’s outstanding service to the justice system and a leader in developing and implementing new approaches to dispute resolution in the service of improving access to justice,” said Osgoode Dean Lorne Sossin. “As a law school with a long tradition of leadership in the dispute resolution field, we are tremendously excited about this initiative and honoured that the chief justice has agreed to lend his name to it. There are numerous Osgoode faculty and students whose work will fit within and be enhanced by the creation of this institute.”

Osgoode Professor Trevor Farrow will serve as the institute’s inaugural academic director. The Winkler Institute will be guided by an advisory board comprised of global leaders in the spheres of law, business, labour, politics and policy.

Fundraising for the institute, and a Chair in Dispute Resolution tied to the institute, currently stands at more than $2 million – over $1 million in donations from more than 40 law firms and individuals, and a matching contribution of $1 million from York University. The fundraising campaign will continue throughout the fall, culminating in a celebration dinner in honour of Winkler on Dec. 4 hosted by the Advocates’ Society, proceeds of which will be donated to the institute.

Winkler is a nationally recognized and distinguished jurist renowned for his many areas of expertise, including labour law and class actions law, as well as his judicial mediation and dispute resolution skills. He has mediated many large national and international disputes, including the Air Canada restructuring and the Walkerton tainted water class action, and was instrumental in the settlement of some of the seemingly most intractable major lawsuits in Canada.

Winkler, who has three law degrees from Osgoode, was called to the Bar of Ontario in 1965 and was appointed a Queen’s Counsel in 1977. He was a partner in the law firm of Winkler, Filion & Wakely. He was appointed to the Ontario Court of Justice (General Division) in 1993, as a regional senior judge for Toronto Region in March 2004 and chief justice of Ontario in June 2007. Following his retirement at the end of 2013, Winkler will become a Distinguished Visiting Professor at Osgoode Hall Law School and the Honorary Chair of the Winkler Institute.