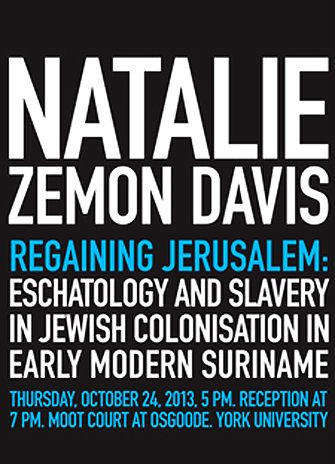 Davis is one of the foremost living historians, especially of the early modern world, and a pioneer in women’s history. She is the author of The Return of Martin Guerre, Fiction in the Archives, Women on

the Margins: Three Seventeenth-Century Lives, and Trickster Tales, among other influential works.

Each year, the Ioan Davies Memorial Lecture series brings prominent international thinkers to York to present their views on culture, democracy and society in changing global contexts. Davis will give the 2013 Ioan Davies Memorial Lecture Oct. 24, starting at 5pm in Osgoode Hall Law School’s Moot Court, in the Ignat Kaneff Building, Keele campus. A reception will follow, beginning at 7pm.

Davis received the Order of Canada in 2012 and in July was awarded the National Humanities Medal from US President Barack Obama in a White House ceremony. In 2010, she received the prestigious Holberg Prize. Her career has taken her to teaching positions at Brown University, the University of Toronto, University of California at Berkeley and Princeton University.

The Ioan Davies Memorial Lecture commemorates the life and work of Ioan Davies, who explored art and popular culture in terms of the kinds of opportunities they offer for common political action. He was the founder of the journal border/lines and the author of several works of fiction and non-fiction, including Cultural Studies and Beyond: Fragments of Empire (Routledge, 1995), Writers in Prison (Blackwell, 1990) and Social Mobility and Political Change (Pall Mall, 1970). He taught at York from 1972 until his sudden death on Feb. 15, 2000.