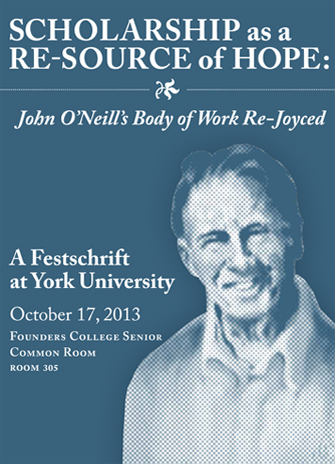 Faculty, staff and graduate students from York University and institutions across Canada, will gather today in the Founders College Senior Common Room to honour York Professor Emeritus John O’Neill, with a public conference and Festschrift.

Scholarship as a Re–Source of Hope: John O’Neill’s Body of Work Re-Joyced, the Festschrift and conference in honour of O’Neill, will be held Thursday, Oct. 17, from 9am to 5pm in Room 305, Founders College. All are welcome.

In the academy, a Festschrift is a book created to honour an academic during his or her lifetime and contains original contributions and papers by the academic’s close colleagues and often includes work by former doctoral students. The Festschrift represents one of the highest honours that O’Neill’s colleagues and former students can accord him. The book will be presented tonight at a private ceremony following today’s public conference.

O’Neill is Distinguished Research Professor of Sociology at York University, a member of the Centre for Comparative Literature at the University of Toronto, and a Fellow of the Royal Society of Canada.

His research incorporates a wide range of interests and a great deal of this concerns the interrelationship between, sociology, philosophy, literary theory and psychoanalysis. In the early part of his career he became a specialist in phenomenological sociology and contributed to the development of Merleau-Ponty’s work on politics, history, language and art. During this time he also became involved with the critical rethinking of sociology and contributed many articles on critical social theory, political economy and mass culture. He is widely acclaimed for his pioneering work on the sociology of the body.

The essays contained in the Festschrift presented to O’Neill relate to his contributions to sociology and include important original research by the following authors:

A prolific and accomplished academic, O’Neill was  the senior scholar at the Laidlaw Foundation from 1993 to 1994, working on the Children at Risk Program. He is the author of Sociology as a Skin Trade (1972), Making Sense Together (1974), Essaying Montaigne (1982) and Five Bodies: The human shape of modern society (1985).

His more recent books are The Communicative Body: Studies in Communicative Philosophy, Politics and Psychology (1989), Plato’s Cave: Desire, Power and the Specular Functions of the Media (1991), Critical Conventions: Interpretation in the Literary Arts and Sciences (1992), The Missing Child in Liberal Theory (1994), and The Poverty of Postmodernism (1995).

He is also the co-editor of the International Quarterly, Philosophy of the Social Sciences and of The Journal of Classical Sociology. Currently, he is working on the political economy of child suffering, welfare state theory and civic practice.

More recently, his attentions have turned to debates surrounding the concept of “civic capitalism” and his current works in progress concern the interconnections between the political economy of child suffering, welfare state theory and civic practice. In this regard, O’Neill has extended his scholarship as the co-editor of the Journal of Classical Sociology and Philosophy of the Social Sciences. He is also an associate editor of Body and Society.