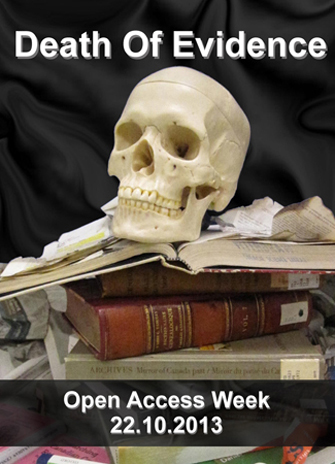 In conjunction with International Open Access Week (Oct. 21-27), York University Libraries will be mourning the “Death of Evidence,” and evidence-based research, on Oct. 22 at 1:30pm in the atrium of Scott Library. Those who would like to pay tribute to the long-form census, which has been cancelled; Library and Archives Canada, whose budget has been cut; or Canadian government scientists who have been silenced, are encouraged to join the Death of Evidence ceremony.

The ceremony will begin at 1:30pm in Central Square, as a procession accompanied by a bagpiper, which will lead guests to the Scott Library atrium (second floor). Three “eulogists,” Dawn Bazely, Janet Friskney and Valerie Preston will speak.

Bazely, professor of Biology at York and director of York University’s pan-university, senate-chartered research centre, the Institute for Research and Innovation in Sustainability (IRIS), will speak on behalf of silenced government researchers. As both a professor, and director of IRIS since 2006, Bazely has participated in conversations about research related to science policy.  She is also a proponent for Open Access and has worked closely with York’s digital initiatives librarian to create the Digital Archive, Churchill Community of Knowledge, in Yorkspace.

Friskney, research officer in the Faculty of Liberal Arts & Professional Studies at York University, also spends time performing executive duties for the Bibliographical Society of Canada. It is on behalf of the Society that she’s been monitoring, for the past several years, the ongoing changes at Library and Archives Canada. She will be speaking on behalf of Library and Archives Canada.

Preston, professor of Geography at York and former York Director for CERIS — The Ontario Metropolis Centre, will speak on behalf of the long-form census and how its cancellation affects researchers. As a social geographer, Preston’s research examines migration trends and policies with particular attention to questions of exclusion and inclusion for immigrant men and women.  She has also worked closely with community and government partners on research about immigrant integration in Canadian housing and labour markets.

Following the speakers’ eulogies, those in the audience will have the opportunity to speak on behalf of science, the census and Library and Archives Canada. More information about the Death of Evidence event can be found here.

From Oct. 15 – 22, members of the York community can submit their own tributes to evidence-based research via Twitter, using the hashtag #RIPevidence. Telling the Libraries, in 140 characters or less, what you will miss most about the loss of evidence-based research, will enter you into a draw to win a copy of Chris Turner’s book, The War on Science: Muzzled Scientists and Wilful Blindness in Stephen Harper’s Canada. The randomly selected, winning entry, will be announced at the Death of Evidence event on Oct. 22. Full contest details can be found here.

Those interested in speaking with York librarians about Open Access or the “death” of evidence-based research can stop by the awareness booths on Oct. 23 at the Steacie Science and Engineering Library from 11am – 12pm, Osgoode Law Library from 12:30-1:30pm, the Bronfman Business Library from 2:30-3:30pm, and the Frost Library from 10:30-11:30am on Oct. 24.