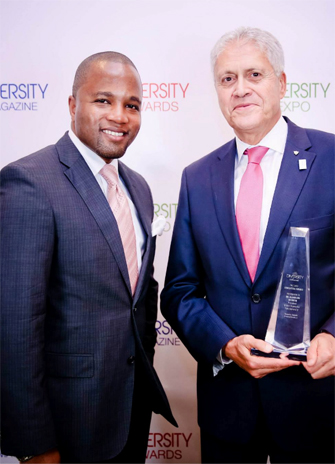 York University President & Vice-Chancellor Mamdouh Shoukri has been named the recipient of a prestigious 2013 Diversity Award in the Education Category. The announcement of the award was made on Oct. 4 by Diversity Magazine at a gala reception held at the Royal York Hotel in Toronto.

The award recognizes Shoukri for his leadership in postsecondary education. He was among of a cohort of 12 leaders from public and private sector organizations and volunteer agencies to be honoured at the event.  Shoukri was nominated by members of the Canadian public and from within the University community. His nomination was selected by a panel under the direction of Silvertrust Communications, the parent company of Diversity Magazine.

“I was honoured to receive this award, particularly because diversity is such a strong value at York and a large source of my pride in the University,” said Shoukri. “I believe that a critical part of the value of education lies in the exposure to diversity in culture and learning. In this sense, York is uniquely positioned to be a leader among Canadian postsecondary institutions in an increasingly globalized world.”

Susan Fennell, mayor of the city of Brampton, Grammy award winner and songwriter Dan Hill, Sir Karim Hakimi, founder of Hakim Optical, and architect and philosopher Douglas Cardinal were among those recognized with Shoukri at the gala.