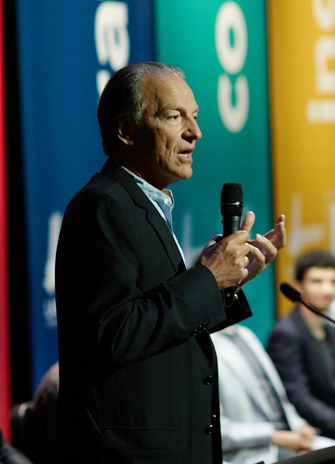 The Lassonde School of Engineering got off to a flying start with a series of events to mark the school’s inaugural academic year.

“We’re hitting the ground running at Lassonde with high profile events to demonstrate our ambitions and to emphasize our commitment to putting students at the centre of everything we do,” said Lassonde School of Engineering’s founding Dean Janusz Kozinski.

The first event, held late last month, was as session on entrepreneurship aimed at Lassonde’s students titled “Who wants to be an entrepreneur?”

The audience of more than 200 students were treated to an impressive roster of speakers giving “Ted-style” talks on what it takes to be an entrepreneur. The speakers came from inside and outside the University.

“At Lassonde we’re creating Renaissance Engineers – entrepreneurial engineers with a social conscience and a sense of global citizenship. What better way to start then to have a truly eclectic group of speakers tackle the challenge of how all our students can become entrepreneurs whether they are starting businesses, competing in the global employment market or creating academic research initiatives,” said Kozinski.

Pierre Lassonde talks to students about the importance of entrepreneurship

Also speaking at the event were: Troy D’Ambrosio from the Lassonde Entrepreneurship Centre at the University of Utah, Paul Gilbert, the CEO of Markham technology firm Quanser; Professor Moren Levesque of York’s Schulich School of Business; and Christian Lassonde, chief venture adviser at Toronto’s entrepreneurship accelerator The Next 36. Also on stage were two of Lassonde’s very own startup companies – Isocrono and Phashtag – both created at York University by Lassonde students and recent graduates.

Entrepreneurs Ahmed Amayem, Will Lau and Vahe Khachikyan from Isocrono wowed the audience with an energetic presentation about how they set up their business and the lessons they’ve learning so far. Josh Sideris and Ragavan Thurairatnam told the story of their firm Phashtag and how they learned the skills they needed from a class taught by Schulich’s Moren Levesque as part of their program at the Lassonde School of Engineering.

“We discovered by the end of the event that the title of the event was in fact completely wrong! It’s not a question of wanting to be an entrepreneur in our global economy, it’s now incumbent on every student to learn entrepreneurial skills whether they want to be the next Canadian entrepreneurial star, work in a major corporation or launch a successful research enterprise,” said Kozinski.