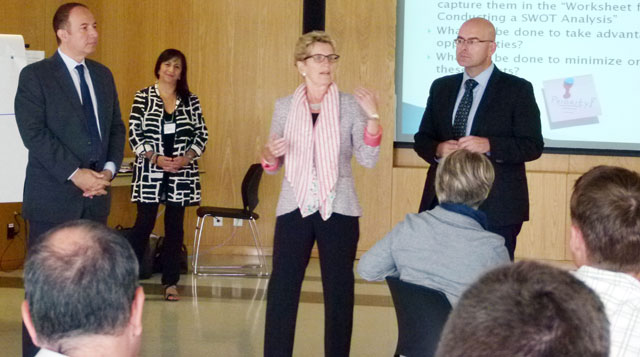 Participants in a Masters Certificate in Municipal Leadership program were already atwitter when Vaughan Mayor Maurizio Bevilacqua stepped into the room Sept. 13 – but there was more excitement to come. The classroom of managers from the Region of York and the municipalities of Newmarket, Richmond Hill and Vaughan were at Vaughan City Hall taking part in a custom leadership consortium organized by the Schulich Executive Education Centre (SEEC).

Facilitator Donna Tomie Jolliffe, who was conducting the SEEC program, explained to the mayor what the class was about and he thanked her and left – only to show up later in the morning with an entourage that included Ontario Premier Kathleen Wynne.

The premier introduced herself and spoke for about five minutes, then took questions from the group.

“It was amazing,” said Jolliffe.

“Only in Vaughan can you take a course and meet the premier!” Bevilacqua told the class.

Jolliffe said Wynne spoke about the importance of leadership at the middle- to senior-management level and praised the Schulich School of Business where her son Christopher Cowperthwaite completed his MBA in 2012.

Wynne told her audience that government needs people like them and said one of the toughest parts of their jobs was telling people what they need to hear and not what they want to hear. “She was encouraging them and her comments generated some good debate,” said Jolliffe. Wynne said she understood how challenging it can be for managers who must answer to both the public and politicians.

“Her visit electrified the room,” Jolliffe said. “Her message was right on point with what we were discussing in the class.”