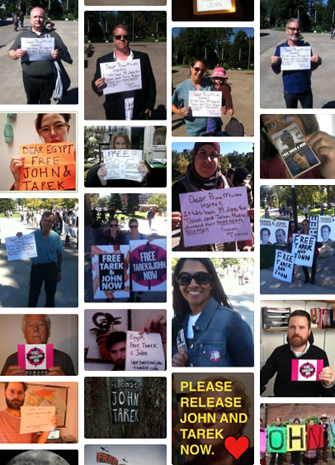 Originally launched in Paris with the goal of bringing contemporary art to the masses, Nuit Blanche has established itself as one of the highlights of Toronto’s annual cultural calendar. Each year, this free dusk-to-dawn event enlivens and transforms the city with original art projects ranging from intimate encounters to large-scale spectacles.

More than one million visitors are expected to turn out for this year’s edition, which takes place from 6:51pm Saturday, Oct. 5 to sunrise on Sunday, Oct. 6. Scotiabank Nuit Blanche 2013 will feature more than 100 exhibitions, performances and experiential events in indoor and outdoor venues throughout downtown Toronto. York University artists are among those contributing one-of-a-kind works to this celebration of creativity and community engagement.

Visual Art & Art History Professor Nina Levitt is part of the team behind freetarekandjohn.tumblr.com, a “portrait petition” to bring attention to the continuing detention of Canadian humanitarians Dr. Tarek Loubani and York film Professor John Greyson, who were arrested on the street in Cairo, Egypt, on August 16. Nuit Blanche will mark the 50th day of their imprisonment. The website gathers images of individuals from around the world holding written messages of support, calling for the release of Greyson and Loubani.

Images from the freetarekandjohn tumblr

Nuit Blanche visitors are invited to contribute to the portrait petition at photo booths located at Toronto City Hall, 401 Richmond Street West and the Gladstone Hotel (1214 Queen St. West). The booths will run a live feed of the growing petition and a video featuring the first 250 portraits uploaded to freetarekandjohn.tumblr.com. The tumbler site will continue after October 5 and includes directions on how to upload your photo from home or mobile.

York visual arts alumna Diane Borsato (BFA ’97) recruited 100 regional beekeepers for her installation Your Temper, My Weather, billed as a massive collective meditation. As the keepers meditate in their bee-suits, viewers are asked to consider the relationship of temper to weather. The beekeepers will silently meditate on notions of “good weather” for the bees and for all of us, attempting to transform environmental conditions with their minds. While exploring the tangible effect of collective meditation, the work creates a public platform upon which to reflect on the health and temper of bees and their keepers, and on the policies and environmental conditions that affect our shared future.

Your Temper, My Weather will be performed from 7pm to midnight in the Art Gallery of Ontario (317 Dundas St. West), where Borsato is currently artist-in-residence.

Sobey Art Award finalist Brendan Fernandes (BFA ’02) takes inspiration from Le Ballet de la Nuit, a 17th century 13-hour court ballet that was most notable for the involvement of the young Louis XIV of France, for his durational performance Night Shift. Fernandes has re-contextualized the ballet into a contemporary dance performance in which dancers endure from dusk until dawn, dancing and making golden confetti in anticipation of the new tomorrow. Night Shift questions notions of labour and time within the context of night changing into day as the dancer’s body endures and asserts itself in the process of performing.

Night Shift can be found both indoors and out around the Bay Adelaide Centre (333 Bay St., access from Temperance St). At dawn. in celebration of the new day, the accumulated piles of golden confetti will be thrown into the air to mark the conclusion of the work.

On October 1, award-winning filmmaker and interactive artist Dylan Reibling (BFA ’02) and his crew set up a circular dolly track in the middle of a busy Toronto street. At 7 pm, they began filming on the track and continued shooting non-stop until 7 am the next morning. Throughout this 12-hour cycle, spectators were invited to step in and interact with the space as they saw fit. The spontaneous performances of these impromptu participants was captured with beautiful cinematography and lighting, heightened by the cinematically epic movement of the dolly shot. Projected onto the atrium wall of TIFF Bell Lightbox (350 King St. West) as an uninterrupted 12-hour film, 12-Hour Dolly invites visitors to spend time contemplating the participants in the film as well as the filmic apparatus itself.

Involved behind the scenes at Nuit Blanche is Kelsey Luxton, a masters candidate in Art History and Curatorial Studies, working as an events programming intern.