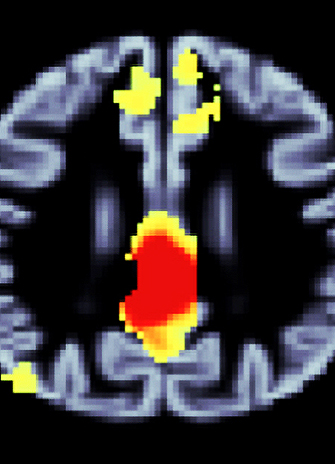 Researchers at York University and Cornell University have found the brain’s default network, a collection of brain regions thought to be involved in cognitive functions such as memory, declines in volume with both normal aging and in Alzheimer’s disease.

These new findings suggest that structural changes in this collection of brain regions may be critical to Alzheimer’s disease onset and this could eventually lead to patients being diagnosed earlier.

“The default network was a vulnerable area and it was more vulnerable in those who would go on to develop the disease,” says York psychology Professor Gary Turner of the Cognitive Aging Neuroscience and Neurointervention Lab in the Faculty of Health.

The network of brain regions highlighted in red and yellow show atrophy in both healthy aging and neurodegenerative disease. These regions are susceptible to normal aging and dementia

Turner and Cornell University Professor Nathan Spreng, the Rebecca Q. and James C. Morgan Sesquicentennial Faculty Fellow and director of the Laboratory of Brain and Cognition at Cornell, found that the brain’s grey matter in the default network shrinks with normal aging across the lifespan, but it does so much more sharply in those who go on to develop dementia, as well as those with a genetic predisposition for the disease. These changes were also associated with declines in general cognitive ability.

“Our data suggest that these structural brain changes may be detectable many years before behavioral signs appear,” says Turner. This could allow for much earlier interventions for Alzheimer’s disease than is currently possible. Their paper, “Structural Covariance of the Default Network in Healthy and Pathological Aging”, was published this month online and in-print in The Journal of Neuroscience.

Turner and Spreng, co-principal investigators, measured brain volume using the brain images of 848 people, from age 18 to 94, to determine the role of the default network in neurodegenerative disease such as Alzheimer’s. They were able to analyze data collected as part of the Open Access Series of Imaging Studies, which provided a cross-sectional data set, and the

longitudinal Alzheimer’s Disease Neuroimaging Initiative, which looked at the same people multiple times over several years. By combining these two large datasets, the authors were able to measure brain changes from young to older adulthood and from healthy aging to neurodegenerative disease.

“What we were really interested in doing with this work was looking at how the brain is altered across the lifespan,” says Turner. “The default network is already known to be implicated in Alzheimer’s disease[…]but we believe this is one of the first reports demonstrating these structural network changes across the lifespan from young to older adulthood and into Alzheimer’s disease. And we were able to look at changes simultaneously across the whole default network.”

They also found that these declines in brain volume were greater in the cohort who carried the APOE4 gene, a genetic marker for potentially developing Alzheimer’s disease, and those with cerebrospinal fluid biomarkers of Alzheimer’s. This shows that structural changes in the default network may be associated with genetic risk of the disease.

“These results help us to better understand the pattern of brain change that occurs across the lifespan and into neurodegenerative disease,” says Turner, who received a two-year Canadian Institutes of Health Research grant of $85,000 to complete the project. “While not a central focus of this study, we hope that with further exploration these findings may, over time, help to inform diagnostic and prognostic decision-making in the clinic.”

In the future, Turner said this research could lay the groundwork for a new series of studies leading to better biomarkers for the disease. “Certainly, these findings highlight the importance of this network as a constellation of brain regions that warrants further study in terms of early identification of the disease.”

The focus of Turner’s research, he says, is to translate these cognitive neuroscience research findings into rehabilitation interventions to enhance cognitive functioning in healthy aging and acquired brain injury and slow the trajectory of cognitive decline in brain disease.