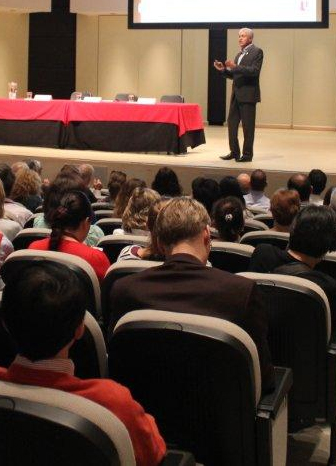 A wave of change has hit Ontario’s postsecondary education sector, and universities and colleges are coping with a triple threat of reduced resources, increased demand and the pressure to differentiate. York University, through a combination of advocacy, efficiency and planning, is positioned to handle this change, said President and Vice-Chancellor Mamdouh Shoukri during yesterday’s Town Hall meeting with faculty, staff and students.

A capacity crowd attended the Oct. 2 event, which was held in the Tribute Communities Recital Hall. Many in the University community also tuned in online to watch the proceedings. York’s president was joined by Provost and Vice-President Academic Rhonda Lenton, and Vice-President Finance and Administration Gary Brewer for the 90-minute meeting, which involved a multimedia presentation and an interactive question-and-answer session.

It was standing room only as faculty, staff and students gathered in the Tribute Communities Recital Hall for the President’s annual Town Hall meeting

Energized from Homecoming and Orientation Week, Shoukri began his remarks with an overview of the high level of student engagement in the events, and took time to thank all involved in making the start of the fall term a success. He then offered a brief outline of the construction underway on campus, and spoke about how the new and renovated facilities are part of creating a world-class university.

He ended his introductory remarks with an overview of the second phase of the University’s brand campaign, “this is my time.” He highlighted that the campaign, informed by extensive research conducted following its introduction last year, has been an important investment that will communicate York University’s message and strengths to prospective students and their families. “Our objective is to encourage students and their parents to see York University as a destination of choice for their education,” he said.

From the calmer waters of orientation and brand awareness, York’s president then offered a presentation about how the University was navigating the pressures threatening to deluge postsecondary systems worldwide.

The 2008 global financial crisis has led to continuing high unemployment and reduced financial resources. “Students expect clear outcomes from their investment in postsecondary education,” said Shourki.  Many, he explained, are now basing their choice for postsecondary institution and program of study on the prospect for employment following graduation. Rapidly shrinking resources, escalating costs that are growing beyond the rate of revenue generation, the pressures of globalization, and a demand for online learning and credit transfer are also contributing to the long list of pressures universities now face.

Meanwhile, governments are facing pressure to increase capacity in postsecondary education as college and university credentials are becoming the prerequisite for success in the new information economy. This lends itself to a landscape of heightened competition for funding for students, research and infrastructure. “For the last 12 years, the grant per student has been going down,” Shoukri said. “The entire postsecondary system is facing demands for increased accessibility. How can we sustain ourselves when there is a growing gap between our revenue and our expenses? There is also the impact of these pressures on the quality of what we do and our ability to conduct research.”

Based on what is happening with the economy and around the world, the government of Ontario has signaled a desire to move forward on the differentiation of universities and colleges.  “This summer, the Ministry of Training, Colleges and Universities (MTCU) held a series of summer working roundtables hosted by the minister [Brad Duguid],” said Shoukri. The government’s approach, he explained, means that universities might differentiate themselves on the basis of program types, program delivery and pedagogy, enrolment size or a focus on either teaching or research.

“This is a big risk because a differentiated system will mean a change in the way that we are funded,” he said. “While I do not necessarily oppose the strategy to differentiate higher education institutions in Ontario, I believe that any such strategy should be evidence-based while also acknowledging the special strengths and missions of individual institutions.”

Shoukri highlighted that the ministry is exploring a list of possible differentiators for universities. In one draft framework for differentiation, the government has articulated a desire for a metrics-based system of evaluating postsecondary institutions. The government is now working with colleges and universities to define which metrics could be used for evaluation. “Whatever the framework, I believe it will be reflected in a new funding formula,” he said.

Online education and credit transfer between universities are also part of the Ontario government’s comprehensive plan to overhaul the postsecondary sector, said Shoukri, as is a focus on graduate education.

“What are the implications? First, we need to know who we are and where we are going,” he said. “Our vision? York University is a comprehensive, research-intensive university playing an outsized role in achieving the province’s innovation agenda through a strategy of community engagement.”

This vision is supported by the University’s Academic Plan and its pillars of academic quality, student success and community engagement.

York has significant challenges that are not so different from other universities, explained Shoukri. “Only by working together can we be successful,” he said. “We are at a crucial moment with the MTCU discussions and the community needs to come together so that we can best position ourselves with the government.” To that end, he announced that one of several different strategies being implemented is the Program Prioritization exercise, which will review all academic programs and administrative departments. “As a community, we need to identify and support what we do well; implement evidence-based change where needed; seize new opportunities; make strategic investments; seek new revenue streams; and reduce our expenses. We are working with the government to advance our shared priorities,” he said in closing.

During the ensuing question-and-answer session, Shoukri, Lenton and Brewer answered questions supplied from the audience, as well as via Twitter and e-mail.  The questions ranged from student use of the new Pan Am /Parapan Am stadium and discounted tickets to the 2015 games, through the importance of funding basic research and what kinds of metrics the government is considering, to the ongoing detention of York film Professor John Greyson.

On the stadium, Brewer said that the Toronto 2015 organizing committee had expressed a desire for students to have an important role in the games and he said he would discuss possible discounts with them.

With respect to research funding, Shoukri highlighted that work needs to be done with the government to inform the ministry of the importance of basic research. “For example, we have top researchers in philosophy and engineering. The difference is that the philosophy researcher does not need a lab, while a researcher in engineering needs a lab. If we are not attentive on this, we can end up on the wrong side of the formula,” he said.

Regarding metrics, Shoukri and Lenton offered an example of benchmarking the number of years a student takes to complete a degree. They outlined the importance of not using years-to-graduation as a measure of success as many students now take longer to complete a degree because they are combining work with their education, an indicator that both agreed needed continued advocacy.

The importance of the Academic Innovation Fund projects in eLearning and experience-based learning was highlighted by Lenton because the University is making significant advancements in both areas and has a focus on student-directed learning and excellence.

The panel also responded to the ongoing detention of Greyson in Egypt. Shoukri said that he had issued statements, made numerous calls to the Canadian government and had spoken personally with the Egyptian ambassador to Canada. “We need to think of new ways to raise the profile of this case and put pressure on Egypt to send our dear friend home. Canada is a country of influence and this can’t happen.”

In closing, the panel agreed that in all areas of life and study at York University it was critically important that all faculty, staff and students pull together and show pride and support for the University in order to navigate the changes ahead.

As the Town Hall drew to a close, Shoukri thanked the capacity crowd and accompanying Twitterverse for attending the event. He invited everyone present and online to continue the conversation on the President’s Town Hall website.