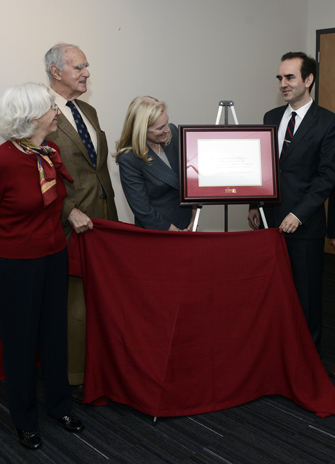 At a reception held Sept. 30 at York’s Keele campus, President and Vice-Chancellor Mamdouh Shoukri and Vice-President Advancement Jeff O’Hagan announced a new gift from the Jackman family in support of the University’s Department of Philosophy.

Henry Jackman, associate professor with the Department of Philosophy, speaking on behalf of his family at the event

Two thirds of the gift will be used to establish the Philosophy Graduate Awards Endowment, and will be matched two to one by the Graduate Studies Awards Program, to create a $2-million endowment. The remaining one third will establish the Philosophy Department Conference Fund, which will be used to host academic conferences, workshops, speakers or other events that contribute to the academic life of the Department of Philosophy at York University.

“With this latest gift, the Jackman family has positioned themselves as champions of education at York,” said Shoukri at the event. “Not only will this generous gift allow us to improve academic and research opportunities for graduate students in our Department of Philosophy, but our increased conference resources will enhance the department’s profile and thought leadership. Gifts like this are a vote of confidence in our programs and send a strong message that even as we build up other areas of strength, such as engineering, we are committed to a continuing investment in our proud tradition of offering the highest quality liberal arts education at York.”

The Jackman family have been valued supporters of York University for many years, contributing significantly to the University’s vision for the future. For more than two decades, Hal Jackman, who served as the 25th lieutenant governor of Ontario from 1991 to 1997, his wife Maruja and the Jackman Foundation have generously invested in York University’s students and programs.

The Jackman family at the Sept. 30 reception to celebrate their gift in support of the University’s Department of Philosophy

Their gifts include the Newton-Rowell Entrance Scholarship at Osgoode Hall Law School, as well as the Newton W. Rowell Graduate Scholarship, also at Osgoode Hall. This is in addition to their many contributions to the Art Gallery of York University and their support of numerous other scholarships and causes that help York students to grow, prosper and succeed.

Henry Jackman, currently a professor in York’s Department of Philosophy, shared why his family decided to initiate this gift: “Our family has enjoyed a long and sustained relationship with York University for decades. Hal Jackman, my father, served a lengthy tenure on York’s Board of Governors, while several of my relatives have also graduated from the University. In a sense, we were raised by York graduate students. Knowing that, we felt it was important to give something back to a school that had given us so much.”

Also in attendance at the announcement were many senior members of York’s academic and administrative communities, including Martin Singer, dean of York’s Faculty of Liberal Arts & Professional Studies, and Robert Myers, professor and chair of the Department of Philosophy.

“When I began my academic career, the humanities were a fundamental part of higher education,” said Singer, adding that today, it is “more important than ever to support these areas with the resources and opportunities necessary for them to thrive. York’s Department of Philosophy is already among the top rated in the world and, with the help of the Jackman family’s tremendous gift, it will be able to take a significant leap forward.”

Myers echoed these sentiments and shared his enthusiasm for the future of the department. “This is a great day for philosophy at York. I am unbelievably excited about the possibilities created with the support of this gift from the Jackman family. York’s philosophy program has historically had to compete for resources and students with schools that are both older and better equipped. This gift levels that playing field, meaning great things for the department and for what we’ll be able to do for our students.”