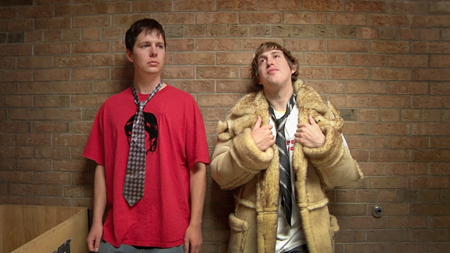 The value of a university degree derives not only from the knowledge and professional skills gained in a particular field of study – it’s also found in the network of friends and collaborators forged on campus.

This is particularly true for a group of York film grads who are poised to celebrate the theatrical and video on demand (VOD) release of their hard-hitting dramatic feature, The Dirties. It opens Friday, Oct. 4 at the TIFF Bell Lightbox in Toronto and in cinemas in New York, Los Angeles and New Orleans. The Dirties will be available for download through VOD on iTunes, Rogers on Demand and many others.

The Dirties follows high-school students Matt and Owen, who are best buddies and cinema geeks living in a world of endless movie references and hi jinks. It would be perfect, if not for a group of bullies who make Matt and Owen miserable. As the duo work on an underdog revenge flick for class, the lines between fantasy and reality begin to blur. Veering from hilarious to horrifying, the film offers an incisive, insightful look at the harrowing consequences of bullying.

The Dirties has already collected kudos at numerous festivals. It won the Grand Jury Prize for Best Narrative Feature and the Spirit of Slamdance award at the acclaimed Slamdance indie fest in Utah in January. This was followed by Best Feature at the Victoria Texas Indie Film Fest and the Independent Visions prize at the Sarasota Film Festival in Florida. The Dallas International Film Festival gave The Dirties a special mention for Narrative Feature and last month it earned “next wave” Best Picture at Fantastic Fest in Austin, Texas. Most recently, it picked up the Audience Choice Award for best feature film at the Toronto After Dark Spotlight Screenings.

The creative team for the production is made up entirely of graduates of York University’s Department of Film, working collaboratively and wearing multiple hats. Director, co-writer, co-editor and co-producer Matt Johnson (BFA ’06) also stars in The Dirties. He was nominated for the Golden Leopard – Filmmakers of the Present award at Switzerland’s prestigious Locarno International Film Festival for his work on the film.

A scene from The Dirties, from left are characters Owen and Matt

Evan Morgan (BFA ‘08) shares writing and film editing credits with Johnson. Jared Raab (BFA ‘08) is director of photography and Matthew Miller (BFA ’03) served as story editor and as producer, a role he shared with Johnson, Morgan and Raab.

Making an independent feature film is no small feat. The Dirties took three years to evolve from a script to a film.  Production began in the spring of 2011.With a loose, improvisation-friendly screenplay and a tight schedule in hand, the team began principal photography, shooting for 20 consecutive days.

In order to make the best use of limited resources, the filmmakers used five different high schools to set the scene for the school featured in the film.Most notably, they worked with Peterborough Collegiate Vocational School, an arts school in central Ontario that gave the team unfettered access to classrooms and hallways during school hours, allowing them to achieve the authentic, documentary look they were striving for.

Johnson says that, despite the challenges of budget constraints and an aggressive filming schedule, the film found its voice early in the production process. “We knew we had something special in the works,” he said.

The critics agree.  Kevin Smith of Mallrats, Dogma and Clerks fame, is distributing the film along with Phase 4 Films. Smith hails The Dirties as “the most important movie you will see all year.”  New York City-based Screencrush gives it a nine out of ten rating. Toronto Film Scene applauds it as an “outstanding piece of cinema”, “a technical masterpiece” and “one of the most powerful movies around”.  The Huffington Post calls it “the most empathetic and human portrait of bullying and its deadly consequences ever put on film”.

Echo Pictures Pictures, the production company behind The Dirties, is a joint venture of Johnson, Morgan and Raab. Their other productions with the company include the hit comedic mockumentary web series Nirvana, the Band, the Show.

Johnson and Miller have both returned to York to pursue an MFA in film and are currently working on their thesis productions.